Twenty years after 6,434 lost their lives in the Kobe earthquake, the Head of the UN Office for Disaster Risk Reduction (UNISDR), Margareta Wahlström, took part yesterday in the official commemoration of the disaster in Japan.

“It is important to remember distant events because a short memory is the enemy of disaster management,” Ms Wahlström said as she congratulated the Japanese people and government for their steadfast remembrance of those who died during an earlier event.

The Great Hanshin Awaji Earthquake struck at 5.46 am local time on 17 January 1995 and in 20 years since, earthquakes have killed more people than any other natural hazard, with almost half of the two million deaths from major reported disasters occurring in earthquakes.

“Five of the most deadly earthquakes of the last 100 years have occurred in the last ten years,” said Ms Wahlström, describing how the 2010 Haiti earthquake destroyed the capital, Port-au-Prince, how the Indian Ocean tsunami affected 14 countries, while the 2008 Szechuan earthquake in China and the 2005 Muzaffarabad earthquake in Pakistan, took over 80,000 lives each.

“These four earthquakes alone had a combined death toll of some 500,000, injured many more and disrupted the lives of millions,” she said. “In addition, the Great Eastern Japan Earthquake and Tsunami in 2011 taught us a lesson about seismic risk in the nuclear age. These five catastrophic events over a short period of time convey a strong message about risk and exposure in the 21st century driven by population growth and urbanization. Proper land use and building codes are key to reducing risk.”

During her trip, Ms. Wahlström will be meeting with Japanese officials to discuss the agenda and arrangements for the Third UN World Conference on Disaster Risk Reduction which will take place in Sendai, Japan, from 14-18 March.

♦ Receive daily updates directly in your inbox - Subscribe here to a topic.
♦ Download the UN News app for your iOS or Android devices.
earthquake|unisdr 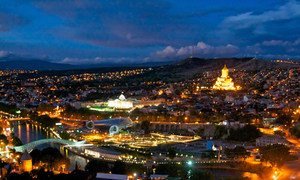 Eight cities in Central Asia and the Caucasus, including capitals Tbilisi and Bishkek, have signed on to strengthen community resilience by integrating disaster risk reduction into their national and local policy, representing a big boost for the United Nations initiative which already has over 2,400 participants worldwide.