UN Photo/Jean-Marc Ferré
Head of the UN Support Mission in Libya (UNSMIL), Bernardino Léon (10th from left) with delegates after the meeting of Libyan parties at UN Headquarters in Geneva.
18 January 2015

Three days after the end of the first round of talks under the Libyan political dialogue process, the United Nations Support Mission in Libya (UNSMIL) has today welcomed the unilateral announcements by the parties in Libya of a ceasefire in order to resolve the conflict peacefully through dialogue and the decision announced in Tripoli by Spokesman Omar Humeidan to join the second round of talks.Updated: 9.40 p.m.

Three days after the end of the first round of talks under the Libyan political dialogue process, the United Nations Support Mission in Libya (UNSMIL) has today welcomed the unilateral announcements by the parties in Libya of a ceasefire in order to resolve the conflict peacefully through dialogue and the decision announced in Tripoli by Spokesman Omar Humeidan to join the second round of talks.

“The Mission calls on the parties to work with UNSMIL on the specific elements of the ceasefire, including the mechanism to ensure compliance with it,” said a press statement released by UNSMIL on the ceasefire, adding that the move was an encouraging sign that made a significant contribution to creating the conducive environment for the ongoing dialogue.

The ceasefire comes after a first round of intensive talks, hosted by UNSMIL in Geneva last week, in which participants agreed upon an agenda for talks going forward, with the aim of reaching a political agreement to form a consensual national unity government, and making security arrangements necessary to end fighting and ensure the withdrawal of armed groups from Libyan cities.

“UNSMIL is calling for an end to the fighting to spare Libyan blood, stop the destruction and pave the way for a peaceful search for solutions to Libya's political and security crisis through dialogue,” the Mission's statement said. “A truce will also allow humanitarian aid to flow to the displaced and the needy in affected areas and will encourage international organizations to resume full operations in the country.”

The Mission urged parties to ensure that the ceasefire applies to ground, sea and air operations as well as movement of armed personnel and vehicles. Committees from both sides will coordinate with UNSMIL regarding tackling any breaches.

In a separate press statement released after Mr. Humeidan's announcement, the Mission said growing support for the dialogue process was proof that all sides were ready to sit down and discuss and end to the conflict.

“This step broadens the base of support for the process aimed at restoring security and stability to Libya.” The statement said. “UNSMIL stresses the importance of the Libyans coming together to decide on how best to build a peaceful and democratic Libya based on the rule of law and respect for human rights. The Mission believes that Libyans should not miss this opportunity if they want to save their country from further destruction, and that they need to expedite the convening of the next round of dialogue.”

The Mission also took note of the proposal to hold the talks in Libya, noting that doing so was a priority, if the logistical and security conditions were met. The statement said consultations were underway to find an acceptable venue with maximum security for participants. 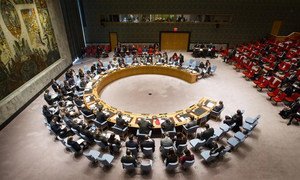 The United Nations Security Council has today commended participants in the Libyan dialogue, which aims to find ways to end the political, security and institutional crisis in the country.