FAO
As part of the African Football Against Hunger campaign, a video ad will feature at Matches throughout the 2015 Africa Cup of Nations.
16 January 2015

A United Nations-supported video campaign to fight hunger in Africa will feature at the matches throughout the 2015 Africa Cup of Nations, starting 17 January, the UN Food and Agriculture Organization (FAO) announced today.

In the video, a footballer dressed in white garb dribbles a ball across an abandoned underground construction site, laser focused, dust stirring up around him as he angles for the winning kick – he takes it and scores – which represents for overcoming hunger in Africa by 2025.

The campaign, ‘African Football against Hunger,’ is a product of the partnership between FAO and the Confederation of African Football (CAF), and will spotlight the breakthrough commitment by African leaders to end hunger in the next decade.

The initiative leverages the global popularity of “footie” to spread a message of solidarity: African nations can overcome hunger in our lifetime, but they need collective action and popular support to reach their goal.

Hunger, unlike the invisible opponent in the video, is tangible across the African continent, says FAO. In sub-Saharan Africa alone, 223 million people – or one fourth the population there – are undernourished. This hampers their ability to lead healthy, productive lives and holds Africa as a whole back from reaching its full potential.

“Football brings together people from all over the continent and that makes it the ideal platform to call for solidarity,” said Mario Lubetkin, FAO´s Director of Communications, during a press conference in Bata, Equatorial Guinea, on the eve of the opening of the Africa Cup of Nations.

He also added that (it can) “bring people across Africa on board with our joint effort to raise the bar in the fight against hunger.”

Home to seven out of 10 of the planet's fastest growing economies, Africa also has the youngest population in the world. However, regional markets are still dominated by foreign food imports and youth unemployment runs high.

In this regard, the FAO-administered Africa Solidarity Trust Fund, also featured in the video, was established in 2013. As the first Africa-for-Africa fund, it has so far leveraged some $40 million from African States (primarily Equatorial Guinea and Angola) for projects that aim to improve agriculture and fight hunger.

The work of FAO and the Fund complement the Comprehensive Africa Agriculture Development Program (CAADP), a home-grown, region-wide cooperative effort to boost agricultural productivity that was launched by governments 10 years ago.

Investments in agricultural development, strong social safety nets and rights to access resources are of great importance to ensure a food-secure Africa, according to the UN agency. It also highlights the need to support small-scale farmers, who work more than 60 percent of the agricultural land.

The Africa Cup of Nations takes place in a pivotal year for international development, with the UN Millennium Development Goals (MDGs) coming to an end and the international community finalizing a set of sustainable development targets to succeed them.

Sustainable livelihoods and food security are likely to be cornerstones of the post-2015 development agenda.

“This is the time for governments, institutions and civil society on the continent to come together and double down on efforts to make hunger history,” Mr. Lubetkin underscored.

Sixteen teams will compete in the Africa Cup of Nations from 17 January to 8 February in venues across Equatorial Guinea. 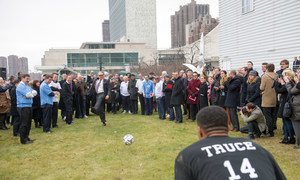 As part of commemorations of the centenary of the First World War, the United Nations Secretary-General today addressed an event at Headquarters dedicated to the 'Christmas Truce' of 1914, when a series of spontaneous ceasefires briefly held, during which soldiers on opposing sides exchanged gifts, sang carols and played an iconic game of football.