United Nations agencies are gearing up for relief efforts in Malawi and neighbouring Mozambique, where heavy rains have caused severe flooding, displaced thousands of people and left scores dead.

In Malawi, severe flooding has displaced more than 100,000 people and reportedly killed some 48 others, Jens Laerke of the United Nations Office for the Coordination of Humanitarian Affairs (OCHA) told reporters in Geneva.

“The floods have caused extensive damage to crops and livestock; people’s homes have been flooded and roads and other infrastructure have been affected,” he elaborated.

According to OCHA, the Malawian Government declared a State of Emergency on 13 January. At the request of the Government and the UN system in Malawi, OCHA has deployed an eight-member UN Disaster Assessment and Coordination (UNDAC) team of specially trained emergency managers to support the national response.

The UNDAC team, made available free of charge by governments and various organizations, is being led by OCHA staff from South Africa for an expected in-country three-week stay.

Although the Government, the UN and its humanitarian partners have been providing assistance to flood-affected communities, some life-saving efforts have been hampered with flooding rendering access impassable. Preparing for a rain forecast, the Government has begun establishing emergency operations centres in various locations in the country’s south and increasing preparedness in the north.

Noting that food stocks would be replenished once the crisis is over, Elisabeth Byrs of the UN World Food Programme (WFP) said that the agency is gearing up its response to the flood-affected districts, “WFP is moving stocks of food from its regular programmes to the flooded areas.”

She announced that WFP is planning to airlift more than 100 metric tonnes of high-energy biscuits from the UN Humanitarian Response Depot in Dubai – enough to meet the immediate food needs of some 77,000 people.

“Ready-to-eat food will be prioritized for the most vulnerable people, particularly children who have been displaced from their homes and have no access to food or cooking facilities,” she added.

Among the poorest countries on earth, Malawi has one of the highest rates of stunting among children. Ms. Byrs recalled that more than 40 per cent of the country's children have low growth for their age as a result of under-nutrition, and she added: “WFP is working together with UNICEF and other UN agencies to assist vulnerable children.”

Assessing the hardest-hit areas has been arduous as the floods have washed away many roads and bridges, with the worst affected areas in the south, namely the Chikwawa and Nsanje districts.

A Government-led agriculture and food security humanitarian cluster has also been activated to help coordinate the response. Initial estimates suggest that as many as 20,000 households, or 110,000 people, have been displaced with many more likely to require assistance. Additional rain forecasts elevated concerns that those numbers may rise.

Responding to questions, Mr. Laerke said that more than 100,000 displaced people are located mainly in the south of the country.” While the Office of the United Nations High Commissioner for Human Rights had received reports that some 48 people lost their lives, and media put the death toll at 57, he attested, “it is difficult to verify assessments in such a precarious situation.”

As the UNDAC team is being deployed today, Mr. Laerke affirmed, adding: “OCHA hopes to get more information in the coming days and during the course of the UNDAC deployment.”

Turning to Mozambique, located south of Malawi, OCHA reported thousands of people have been affected by related flooding.

Mr. Laerke emphasized that parts of the Zambezi River are above alert level and the bridge over the Licungo River has become impassable – effectively cutting off the north of the country.

The Mozambique Government has issued a ‘red alert’ for the central and northern regions, activating national response partners. Mr. Laerke said: “The Government and national partners are providing assistance to affected communities and the UN stands ready to provide support should it be requested.”

In response to a question, Mr. Laerke said he had an “as-yet unverified figure that the floods had affected 50,000 people.” 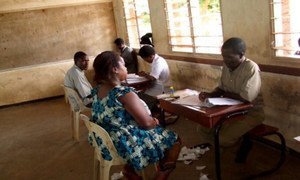 United Nations Secretary-General Ban Ki-moon today called on all candidates, political parties, and state institutions in Malawi to remain calm and to support fully the Malawi Electoral Commission in completing its work.