WFP/Joelle Eid
A Syrian refugee family running back home under the snow on their way back from a WFP supermarket in the Za'atari camp.
16 January 2015

As winter conditions worsen across the Middle East, additional funding is ‘urgently needed’ to enable the United Nations and other humanitarian actors to reach millions of distressed Syrians before it is too late, a senior UN relief official urged today.

“Winter has brought more hardship to Syrians already struggling to find safe shelter and ways to feed, clothe, and protect their families from illness and exposure to risk,” Yacoub El Hillo, the UN Humanitarian Coordinator in Syria, said in a press release.

The official’s comments come as many Syrians continue to reel from the brutal winter storm that has battered large swathes of the Middle East, dumping snow and rain on the region and lowering temperatures below freezing.

In preparation for the cold season, the UN and its partners had launched a $206 million winterization plan in October 2014, targeting some 3.3 million people inside Syria with blankets and warm clothing, fuel, winter kits, and cash assistance.

Nevertheless, the winter plan remains underfunded by $70 million, according to the UN’s Office for the Coordination of Humanitarian Affairs (OCHA).

“After four years of crisis, people’s ability to cope is extremely stretched, and the needs continue to grow,” Mr. El Hillo continued. “Though the international community has been generous, funding has not kept pace in the face of growing needs.”

Against that backdrop, efforts to provide tens of thousands of Syrian families trapped in the besieged neighbourhood of Al-Wa’er in Homs are making headway as UN convoys carrying food for 75,000 people approach the heavily shelled city.

Speaking to reporters in Geneva, UN World Food Programme (WFP) spokesperson Elisabeth Byrs explained that, following extensive negotiations, a first convoy carrying 8,500 family food rations was delivered on 15 January to support some 42,500 civilians. The remaining 6,500 family rations, which would support 32,500 people, would be delivered in two additional convoys over the coming days, she said.

The WFP spokesperson added that conditions in Al-Wa’er had deteriorated over the past month amid an intensification of shelling and fighting which prevented all access for humanitarian deliveries. In addition, she noted, the heavy snowstorms which hit the region fuelled concerns over worsening humanitarian conditions for the estimated 250,000 residents trapped inside the neighbourhood.

Ms. Byrs echoed Mr. El Hillo’s appeal for additional funding, stating that the WFP alone urgently required $214.5 million for its operations in Syria and the region out of which $112.6 million was needed to meet food assistance needs for the next four months. 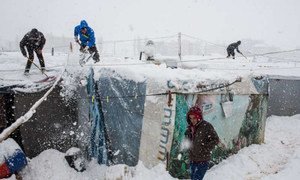 The United Nations refugee agency has been working around the clock this week to help the millions of Syrian refugees and internally displaced people scattered across the Middle East endure a severe winter storm that has swept through much of the region.