UN-facilitated Libyan political dialogue to continue next week in Geneva

UN Photo/Jean-Marc Ferré
Head of the UN Support Mission in Libya (UNSMIL), Bernardino Léon (10th from left) with delegates after the meeting of Libyan parties at UN Headquarters in Geneva.
16 January 2015

Two days of intensive United Nations-led political talks aimed at finding ways to end Libya’s political, security and institutional crisis came to an end in Geneva yesterday, with stakeholders agreeing to pick up the dialogue again next week, expressing their unequivocal commitment to a united and democratic Libya governed by the rule of law and respect for human rights.

The talks, hosted by the United Nations Support Mission in Libya (UNSMIL), were held at the Palais des Nations in Geneva, and a press statement from the Mission said the discussions had been ‘constructive and conducted in a positive atmosphere,’ reflecting the participants' sincere commitment to reach common ground.

“Dialogue is an ongoing process,” the statement said, adding that Special Representative of the Secretary-General and head of UNSMIL Bernardino Leon noted he expected the process to take time and ‘travel a difficult road.’ Still, there was a need for commitment to urgently solving the crisis.

“Time is of the essence and all sincere Libyans must quickly move towards finding solutions to the crisis if they are to prevent further political, security and economic deterioration in their country,” the statement said.

In this week’s talks, participants agreed an agenda aiming to reach a political agreement to form a consensual national unity government, as well as making security arrangements necessary to end fighting and ensure the withdrawal of armed groups from Libyan cities. There was also a call for confidence-building measures to safeguard Libya’s national unity and to alleviate the population’s suffering were also discussed.

The dialogue is guided by a set of principles, including commitment to the foundations of the 17 February 2011 revolution, respect for the legitimacy of State institutions, separation of powers and the peaceful transfer of power, and the rejection of violence and terrorism.

“The dialogue is an inclusive and transparent process driven by Libya's supreme national interest, including safeguarding the country's national unity and protecting its resources and wealth,” said the statement.

The Mission and the participants expressed their hope that all the invited representatives, including those who did not attend this round, would take part in a new round of talks again scheduled for next week.

Participants also expressed concern about the growing terrorist threat, calling for concerted efforts to counter it, and condemning the recent killing and abduction of Libyan citizens and foreign nationals.

The first round of talks conclude at the same time the UN refugee agency (UNHCR) describes an upsurge in fighting since the start of the year that has sparked more displacement, with many fleeing for their fourth or fifth time.

Most displacement has occurred around Benghazi, Derna, and near the Gulf of Sidra in Ben Jawad and Ras Lanuf and although numbers are hard to estimate, the Agency points to the Benghazi local council reporting 90,000 unable to return to their homes.

“Across the country we estimate that approximately 400,000 people are displaced,” said the UNHCR in a press statement. “In addition, Libya is host to nearly 37,000 refugees and asylum-seekers of different nationalities whose humanitarian conditions are increasingly precarious.”

Most people have been displaced for over 3 to 6 months with increasing numbers being hosted in public facilities such as schools. As their cash savings dwindle they are unable to pay for housing rentals. The winter months are especially tough as temperatures in Tripoli, Benghazi and the Southern towns are below 10 degrees Celsius.

In the past 7 months, UNHCR has distributed winter- and non-food items to 27,940 people in Tripoli and other western cities, including to members of the Tawerghan community displaced since 2011.

On 5 January, in partnership with the Tomazeen non-governmental organization in Libya, UNHCR delivered non-food items such as sleeping mats, plastic sheets, and kitchen sets to 150 displaced families in the Southern towns of Ghat, Lawenat and Tahala targeting the most vulnerable families. 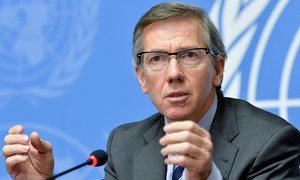