UNHCR/B. Szandelszky
Members of a family gather on the floor of their dilapidated apartment in downtown Amman, Jordan.
14 January 2015

As the Syrian civil war continues to rage into its fifth year, large numbers of refugees fleeing the hostilities are steadily slipping into abject poverty due to the breadth of the crisis and “insufficient support” from the international community, the head of the United Nations refugee agency (UNHCR) warned today.

The agency’s latest study on the plight of those displaced by the conflict, entitled Living in the Shadows, reveals evidence of a “deepening humanitarian crisis” affecting the 150,000 refugees profiled with one in six Syrian refugee households living in abject poverty and two-thirds of refugees across Jordan now living below the poverty line, according to an agency press release.

“Unless the international community increases its support to refugees, families will opt for ever more drastic coping strategies. More children will drop out of school to work and more women will be at risk of exploitation, including survival sex,” António Guterres, head of UNHCR, said as he launched the report from Jordan, where he is scheduled to meet with refugees in the capital, Amman, and at the Za’atari camp.

“I am here to express my solidarity with Syrian refugees, as the impact of snowstorm Huda is still tangible and posing an even greater strain on their already dire living conditions,” he added, referring to the deadly winter storm that has swept across the Middle East over the past few days.

In its findings, the report notes that almost half of the households visited by UNHCR researchers had no heating, a quarter had unreliable electricity, and 20 per cent had no functioning toilet. In addition, rental costs were accounting for more than half of household expenditures, forcing refugee families to share accommodations in order to reduce costs.

With the fighting in Syria continuing unabated, many refugees are also finding themselves increasingly dependent on assistance. Jordan, for instance, has a registered Syrian refugee population of 620,000 with an estimated 84 per cent residing outside of refugee camps. Mr. Guterres warned that this places an excessive burden on Jordanian resources and infrastructure and represents “a dramatic pressure in the economy and the society of the country.”

Mr. Guterres has long lamented that international funding for the many refugee populations scattered across the world is drying up, leaving many of the most vulnerable exposed to the hardships of displacement. In Jordan, where UNHCR is making an effort to address the “critical” situation through a monthly cash assistance programme targeting 21,000 Syrian families, over 10,000 additional families nonetheless remain unassisted due to lack of funds.

“The generosity of the Jordanian people and the Government needs to be matched by massive support from the international community – support for the refugees themselves and for the local populations hosting them, but also structural and budgetary support to the Jordanian Government for education, health, water and sanitation and electricity to enable it to cope with this enormous challenge,” Mr. Guterres concluded. 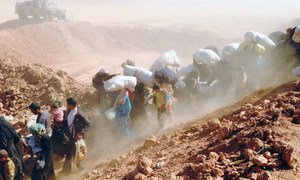 UN report: 5.5 million displaced by war in first half of 2014, setting record

War across large swathes of the Middle East and Africa in the first six months of 2014 forcibly displaced some 5.5 million people, signalling yet another record, the United Nations reported today.