The United Nations Special Adviser on Cyprus, Espen Barth Eide, voiced concern that, despite some recent openings in the talks, it has been impossible to get negotiations back on track.

“We were not able together to stack the package in the right order, so now we’re back in an impasse,” Mr. Eide said on Tuesday following a meeting with Turkish Cypriot leader Dervis Eroglu.

Mr. Eide, who is currently on a visit to Cyprus, added that he was in the country to listen to what Mr. Eroglu and Greek Cypriot leader Nicos Anastasiades had to say about the current impasse.

Urging all parties to do their utmost to move back to the table and to create the necessary conditions for negotiations, the envoy said it was unfortunate that the impasse came about just as he was due to brief the Security Council.

“I have in meetings with the press said that I’m a realistic optimist; I still think that’s true,” he said. “But I’m getting more concerned, because I will remind you that in one of our earliest meetings at this particular place I said that if the impasse lasts a few weeks and maybe only a few months, it will not hurt the process in the long run. Now, I think that it’s actually beginning to hurt the process and we may see negative developments in the months to come.”

Mr. Eide called on the Security Council to work with both sides with the aim of resuming negotiations.

Speaking to reporters today following his meeting with Greek Cypriot leader Nicos Anastasiades, Mr. Eide, said that they had a constructive meeting and that he acknowledged Mr. Anastasiades’ positive contribution, which he said is something to build further on.

He again expressed his concern about the impasse and that matters are de facto moving in the wrong direction.

Mr. Eide said that he will brief the Security Council on 26 January and will urge cooperation from the sides in Cyprus and from all other States to help create the conditions neessary for a speedy resumption of the talks. 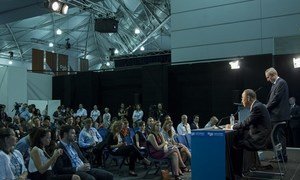 On the margins of the G20 Summit in Brisbane, Australia, United Nations Secretary-General Ban Ki-moon today met with senior European officials as well as Turkey's Prime Minister to discuss the ongoing Ukraine crisis, the Ebola outbreak, climate change, and combating the Islamic State of Iraq and the Levant (ISIL).