Briefing the press in Geneva this afternoon, UNICEF’s Christophe Boulierac warned that the number of children who need clothes and winter items is increasing exponentially. Six children have already died due to the extreme weather. Temperatures in parts of Syria are currently reaching -11 degrees Celsius.

Living in tents, unfinished buildings and inadequate shelters, more and more children are being exposed to sub-zero temperatures, heavy snow and strong winds. This leaves them vulnerable to respiratory tract infections and other illnesses associated with cold weather.

To respond to the dire needs, UNICEF is delivering warm clothing, blankets, heating supplies, cash and vouchers to 916,000 children in Syria, Iraq, Lebanon, Jordan and Turkey of the 1.3 million target children. In Syria, where war nears its fourth year, winter supplies have reached 350,000 children.

The rain and heavy snow have caused havoc and “untold misery” for so many, Mr. Boulierac said. In the Idleb governorate 300 tents were swept away by floods, affecting about 1,000 people. Fires have started in some dwellings because people do not have security lights or have burned plastic to stay warm.

Most families do not have access to fuel or electricity, or simply cannot afford to buy it. In recent weeks for example, the cost of diesel increased by a further third, 16 per cent of gasoline. The price of fuel had increased 350 per cent since the beginning of the crisis.

In Syria, UNICEF and its partners have distributed winter clothing for 350,000 children as well as tents and hygiene kits. The UN agency is also supporting Syria’s Ministry of Education in providing fuel tanks and radiators in 65 schools for 40,000 children and 1,400 teachers.

The prevailing harsh winter and snowstorm has created untold miseries amongst the displaced population. A hospital in the area has reported increased respiratory and infectious diseases in children. And it is reported that five people died in or near Damascus due to the bad weather. Another child died, with his father and another adult in Lebanon while crossing the Syrian-Lebanese border into Lebanon.

In preparation for winter, UNICEF in Lebanon had stored 28,000 winter kits, but is saying now that may be insufficient as the number of vulnerable children has spiked. UNICEF Lebanon’s winter items and vouchers had been provided to 200,000 children in the most exposed areas of the country, including in elevated areas such as Aarsal and it aimed to reach a total of 478,000 children in the coming weeks.

In Jordan, UNICEF is providing them with winter kits and cash assistance to some 100,000 Syrian refugee children and their families. In Turkey, the winter response had reached 62,000 children, including 22,000 children from Kobane aged three to 11 years in Suruc. And in Iraq, winter clothing kits had been distributed to over 200,000 children in over 100 hard-to-reach and high altitude areas.

Despite all these humanitarian operations, major challenges persist, Mr. Boulierac stressed, emphasizing that the number of vulnerable children grows on a daily basis and that they often move around making planning very difficult. He appealed to donors for funding so that UNICEF could continue its work. 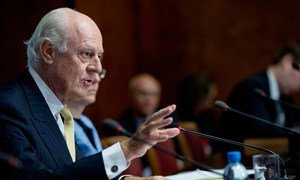