OCHA/Gemma Cortes
According to UN estimates, nearly 440,000 people remain displaced inside the Central African Republic (CAR) while some 190,000 have sought asylum across the borders.
13 January 2015

The unpredictable and hostile security situation in the Central African Republic (CAR) is having severe consequences for the country’s population still in dire need of humanitarian assistance, the United Nations World Food Programme (WFP) declared today.

The report – based on data collected from 2,166 households and covering all prefectures of the country between 13 and 25 September 2014 – assesses how the UN agency can best address the current needs of the CAR population. In addition, it maps the long-term negative effects food insecurity may have on children’s growth and people’s means of income, noting that displaced people living with host families and in camps were among the most vulnerable groups.

More than two years of civil war and sectarian violence have displaced thousands of people in the CAR. According to UN estimates, nearly 440,000 people remain displaced inside the country while some 190,000 have sought asylum across the borders. At the same time, more than 36,000 people – including the Peuhl – remain trapped in enclaves across the country, hoping to find asylum in neighbouring States.

In December, Under-Secretary-General for Peacekeeping Operations Hervé Ladsous warned of a potentially explosive situation in the CAR amid continuing violent clashes between the mainly Muslim Séléka alliance and anti-Balaka militia, which are mostly Christian.

Ms. Byrs told reporters today that the WFP study had also found that those most affected by food insecurity in the CAR were poor households headed by women, displaced or returned persons, whose primary sources of food were markets, who did not have financial resources and had low levels of education. As a result, she cautioned, affected people, were now adopting coping strategies that were becoming increasingly damaging and dangerous.

Moreover, added the spokesperson, with the sale of food products accounting for 60 per cent of incomes across the CAR, a precipitous reduction in food production was also jeopardising household incomes and narrowing the scope of job opportunities. 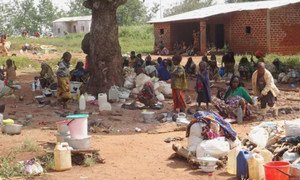