Speaking at a press briefing in Geneva earlier today, Ravina Shamdasani, spokesperson for the Office of the High Commissioner for Human Rights (OHCHR), said the UN agency deeply deplored “the vicious, ruthless attacks against civilians” in and around the Nigerian town of Baga, in Borno State, where Boko Haram has reportedly been operating since 3 January.

“The deliberate targeting of civilians is clearly prohibited by international law and we are very concerned at reports that there were children and elderly people among the victims,” the OHCHR spokesperson told reporters.

According to the initial “shocking” accounts, she continued, were reports that girls, possibly one as young as 10, were also forced to carry out attacks at marketplaces in nearby Maidugiri, also in Borno State, and in Potiskum, in Yobe State. Ms. Shamdasani emphasized that the use of a child to detonate a bomb was “not only morally repugnant but constitutes an egregious form of child exploitation under international law.”

Just last week, the UN refugee agency (UNHCR) reported that the number of Nigerian refugees seeking safety in Chad due to the precipitating security situation had almost quadrupled over the past 10 days after attacks by Boko Haram uprooted about 7,300 Nigerians. Most of the refugees, the agency added, were forced into western Chad, where many are now staying with local communities in villages around 450 kilometres north-west of the capital, N'Djamena.

Meanwhile, a spokesperson for the UN Office for the Coordination of Humanitarian Affairs (OCHA) said the 3 January attack on the town of Baga alone caused 3,400 people to flee to Chad.

In her briefing, Ms. Shamdasani said OHCHR urged the Nigerian Government to act swiftly to restore law and order in the area while also ensuring that security operations are conducted in line with international law and full respect for human rights.

“We also urge Nigerian authorities to redouble their efforts to create conditions for an effective investigation into the incidents, with a view to establishing the facts surrounding the killings and holding the perpetrators accountable.” 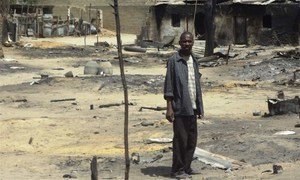 Appalled by the escalating bloodshed at the hands of Boko Haram in northern Nigeria over the past week, capped by reports that suspected child suicide bombers attacked a crowded market in war-torn Borno state, United Nations Secretary-General Ban Ki-moon and Anthony Lake, head of the UN Children's Fund (UNICEF), have both strongly condemned the terrorist group's “depraved act.”