Logan Abassi/MINUSTAH
The Haitian government and the UN Operations have teamed up with project 16/6 - a rebuilding initiative that includes construction training programs.
12 January 2015

Marking the anniversary of the massive earthquake that struck Haiti five years ago today, Secretary-General Ban Ki-moon has paid tribute to the more than 200,000 victims, including 102 United Nations personnel, who perished, and declared that in sorrow, there is the promise of hope that the progress achieved by the Haitian people in the wake of the tragic event could be built upon.

“I vividly recall the devastation and suffering I witnessed during my visits to Haiti in the aftermath of the catastrophe. The sense of grief remains fresh in our minds, said the Secretary-General in a message on the sombre occasion.

“Today, we honour the memories of the daughters and sons, fathers and mothers, friends and loved ones who lost their lives. We also pay homage to those who survived and whose resilience and commitment are a source of inspiration to the world,” he said.

Mr. Ban recalled that last week, he had the honour of unveiling a memorial for UN colleagues who died on that terrible day. “Today, I ask that we join together to celebrate their lives and contributions to Haiti and its people. We remain eternally grateful for their sacrifices.”

Yet the Secretary-General pointed out that in sorrow, there is the promise of hope. Last year, he returned to Haiti and had seen the progress that has been achieved. He commended the Haitian people for their perseverance and urged the international community to continue its invaluable support for the benefit and future of all Haitians.

“Haiti's recovery has not been easy. There have been – and continue to be – setbacks along the way, and there is much work still to be done to ensure political and institutional stability, democratic governance and sustainable development,” said the UN chief.

“However, let today be a day of remembrance and one of hope for a stable and prosperous Haiti. Together, let us strive towards a bright future for Haiti,” he concluded.

In an interview with UN Radio, General Jose Luiz Jaborandy, Jr., Force Commander of the UN Stabilization Mission in the country (MINUSTAH), said that throughout its 11 year history, the Mission had always stood with the people and Government of Haiti. In 2010, he said, both the country and MINUSTAH had suffered a great tragedy, and today was a day to celebrate their sacrifice in the name of peace.

“So, we are here, with the people and to [support] the national authorities to regain the path to the future; looking forward in a positive way, for the benefit of the Haitian people,” he said.

On the political situation, General Jaborandy expressed hope that the national authorities would show willingness to build a consensus to overcome the current impasse and to begin working had to provide the stability and resources that the Haitian people need for the future. 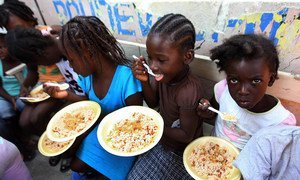