The Office of the UN High Commissioner for Refugees (UNHCR) reported that attacks in Borno state have uprooted about 7,300 Nigerians, forcing them into western Chad, where most are staying with local communities in villages around 450 kilometres north-west of the capital, N’Djamena.

A spokesperson for the UN Office for the Coordination of Humanitarian Affairs (OCHA) said the 3 January attack on the town of Baga alone caused 3,400 people to flee to Chad.

“The Government of Chad has requested international assistance,” said the spokesperson. “The Chadian Government has sent a mission and a medical team to the areas and is providing food assistance and other basic supplies. Humanitarian agencies including OCHA, the UN Children’s Fund (UNICEF), UNHCR, the World Food Programme (WFP) and the World Health Organization (WHO) are currently in the area assessing needs.”

Mr. Edwards said UNHCR teams are seeking more information on the new arrivals and their needs and noted that the attack on Baga left hundreds dead and forced most of the town’s surviving inhabitants to flee.

Meanwhile in Niger, UNHCR has started to relocate refugees from the border area, so far moving 336 people to a camp deeper inside Niger, with more planned for next week. The refugees fled after a November attack on the Nigerian town of Damassak.

UNHCR, working alongside the National Eligibility Commission of Niger, is registering refugees as they arrive at the new camp, giving them identity documents and providing basic relief items, including drinking water and latrines.

In December, the first results of a continuing Government census, organized with UNHCR’s technical support, revealed that at least 90,000 people, including Niger nationals previously living in Nigeria, have found refuge in Niger’s Diffa region since May 2013. Many have chosen to remain close to the border, hoping to return to their home villages when the situation calms down.

Some 200,000 people have fled Nigeria to neighbouring countries, including Chad, Cameroon and Niger, according to figures from OCHA. 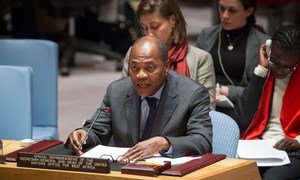