WHO/Saffea Gborie
WHO mobile lab scientists at the crossing point between Guinea and Sierra Leone, two of the countries affected by the Ebola outbreak in West Africa.

8 January 2015
The United Nations World Health Organization (WHO) today convened in Geveva its second ever high-level meeting on Ebola vaccines access and financing, to review the current status of clinical trials and plans for Phase II and Phase III efficacy trials.

The United Nations World Health Organization (WHO) today convened in Geneva its second ever high-level meeting on Ebola vaccines access and financing, to review the current status of clinical trials and plans for Phase II and Phase III efficacy trials.

“We are here to take stock, plan the next steps, and make sure that all partners are working in tandem. We all want the momentum and sense of urgency to continue,” Dr. Margaret Chan, Director-General of WHO said as she kicked off the meeting.

The most advanced candidate Ebola vaccine is scheduled to enter Phase III efficacy clinical trials in West Africa in January/February 2015, and if shown effective – will be available for deployment a few months later.

“You have given yourselves some very tight deadlines and are moving ahead quickly. In fact, what you are doing is unprecedented: compressing into a matter of months work that normally takes 2 to 4 years, yet with no compromise of international standards of safety and efficacy,” Dr. Chan said.

“I think all of us have high expectations for the outcome of this meeting. As a WHO staff member who has spent several months in Guinea recently observed, what people need most is hope. They have watched families and communities torn apart by this virus for a year and are close to despair” she said, adding: “You can give them some of that hope.”

Participating in today’s discussions were representatives from manufacturers and research institutions, currently developing or testing Ebola candidate vaccines, Government officials from the Ebola-affected and neighbouring countries, and non-governmental organizations and partners.

Also on the agenda were discussions on funding mechanisms for potential Ebola vaccine introduction and the process for decision-making on introduction beyond Phase III trials. The first high-level meeting on Ebola vaccines access and financing was held on 23 October 2014.

“During this meeting, you will take a look at safety and immunogenicity data emerging from Phase I clinical trials of two candidate vaccines and review the status of other vaccines,” Dr. Chan said, adding that no major safety signals have been reported to date.

Participants would also look at vaccine pipelines and consider the plans of companies to extend the safety database during Phase II evaluation. Equally important are discussions for Phase III efficacy trials in the three countries, she said.

“We will seek clarity on roles and responsibilities and how to coordinate the different actions. We also need some hard thinking about implementation challenges and how to overcome them.”

Updating participants on the Ebola situation in Guinea, Liberia, and Sierra Leone, Dr. Chan said that 2014 did not end with a best-case scenario. Many health care workers are still getting infected, including nationals and doctors and nurses from foreign medical teams.

At the same time, the situation in Liberia looks “far more promising” than it did in October and November, she continued. But transmission continues. Some believe that the virus has moved from the cities into extremely remote rural areas, making it difficult to see what is really happening in Liberia.

In yet another turn of events, Sierra Leone has now outstripped Liberia as the worst-affected country. Several hundred cases are being reported each week. 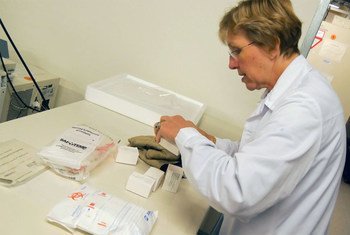 6 November 2014
The United Nations World Food Programme (WFP) today said the Ebola crisis response “needs to scale up, get better and perform faster,” as the UN health agency reported that if judged safe, larger scale trials of an experimental vaccine could be taken to hard-hit West African countries as early as January 2015.