UN Photo/Eskinder Debebe
Memorial Service in honour of UN personnel who lost their lives while serving the Organization.
8 January 2015

At a solemn event at United Nations Headquarters this morning, Secretary-General Ban Ki-moon honoured colleagues killed on duty, as he explained that while demand for humanitarian workers is growing at an unprecedented rate, direct attacks against those vital actors are on the rise.

“Let us pause together for a minute of silence in their memory,” Mr. Ban said, adding that the fallen colleagues had paid “the ultimate sacrifice” while serving the cause of peace, development and human rights.

“In the past year, UN staff members have been killed while they were relaxing over dinner in a restaurant in Kabul. Two colleagues were targeted deliberately after getting off a plane at Galkayo airport in Somalia. And a UN Volunteer from Sudan who was treating Ebola patients in Sierra Leone succumbed to the disease himself,” the Secretary-General explained.

“Some were targeted deliberately; others were killed while protecting civilians; still others perished in accidents or natural disasters. All died while performing their duties in difficult and dangerous circumstances.”

Also at today’s ceremony, the UN paid tribute to the 102 colleagues who died in the devastating earthquake that hit Haiti five years ago this month.

“The terrible memories of that day are still fresh in all our minds, and in the minds of Haiti’s people. The gaps left by our fallen staff members can never be filled. I visited last July and laid a wreath in memory of our beloved friends and colleagues,” the UN chief said.

“I am appalled by the number of humanitarian workers and peacekeepers who have been deliberately targeted in the past year, while they were trying to help people in crisis,” Mr. Ban said.

“I have seen many of these missions for myself. The bravery shown by United Nations staff under fire is an inspiration to all of us, every day,” Mr. Ban said.

Vowing commitment to their safety, Mr. Ban stressed the importance of better equipment and in-depth training. Member States must support these efforts, provide funding, and ensure that all those who attack UN staff are brought to justice.

While attacks have been more frequent, demand for peacekeeping and humanitarian operations has risen to unprecedented levels and is likely to continue to increase, due to the effects of climate change and competition for resources, the Secretary-General said.

“The best memorial we can offer our fallen colleagues is to continue their work, to expand our operations, to extend our open hand, wherever help is needed.”

♦ Receive daily updates directly in your inbox - Subscribe here to a topic.
♦ Download the UN News app for your iOS or Android devices.
UN staff

Secretary-General calls for release of detained and missing UN staff 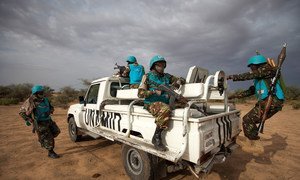 The Joint United Nations and African Union Mission in Darfur has reported that its peacekeepers came under two separate attacks today while on patrol, both times by unidentified gunmen.