At UNESCO headquarters in Paris, the UN flag flies at half-mast in homage to victims of yesterday's attack on Charlie Hebdo. UNESCO/Pilar Chang-Joo
8 January 2015

The United Nations agency tasked with defending freedom of expression, in solidarity with France, today joined the country in mourning those killed in the deadly attack on Charlie Hebdo magazine.

The United Nations agency tasked with defending freedom of expression, in solidarity with France, joined the country today in mourning those killed in the deadly attack on Charlie Hebdo magazine.

Like the French authorities, staff at the UN Educational, Scientific and Cultural Organization (UNESCO), headquartered in Paris, observed a minute of silence at noon today.

Later in the day in New York, the UN Security Council, ahead of a scheduled meeting on the situation in the Democratic Republic of the Congo, also held a moment of silence to commemorate the victims of the Paris attack.

“UNESCO is more determined than ever to protect the free and independent press,” Irina Bokova, Director-General of UNESCO, said in a statement yesterday condemning the attack.

“The international community cannot let extremists sow terror and prevent the free flow of opinions and ideas,” she stressed.

Yesterday, UNESCO announced that it had lowered the flag to half-mast in respect for those killed and injured.

Calling the assault a “cold-blooded crime”, UN Secretary-General Ban Ki-moon said it was a direct “attack against freedom of expression and freedom of the press - the two pillars of democracy.” 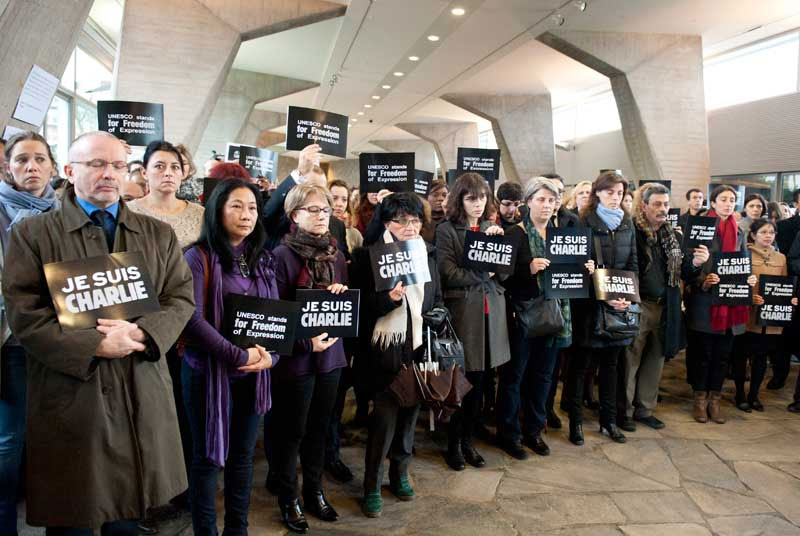 Staff at UNESCO headquarters pay homage to the victims of the Charlie Hebdo attack in one minute of silence. Photo: UNESCO/Nora Hougenade
♦ Receive daily updates directly in your inbox - Subscribe here to a topic.
♦ Download the UN News app for your iOS or Android devices.
Press|Freedom

Ban outraged by 'horrendous and cold-blooded' attack on French magazine