On his first tour of Ebola-stricken Liberia, the newly appointed Special Representative of the Secretary-General for the United Nations Mission for Ebola Emergency Response (UNMEER) today outlined his vision to tackle the scourge in what he called a “3C approach” which he described as recognizing the vital roles of “countries, communities and coordination.”

Briefing journalists at Spryggs Airport in Monrovia, Ismail Ould Cheikh Ahmed described his first impression of the situation on the ground as “mixed.” On the one hand, he begins his post with “a lot of optimism,” but on the other hand, he recognizes mounting challenges to end Ebola.

“We are not yet there. There is certainly still a lot to be done for Liberia to be claimed free [of Ebola],” he said, expressing concern that successes and optimism may provoke a “degree of complacency.”

During his visit, the new UNMEER head met with the President Ellen Johnson Sirleaf, Minister of Health, representatives of non-governmental organizations, and the UN system which remains “quite active” on the ground. Joined by UN Special Envoy on Ebola David Nabarro, Mr. Ould Cheikh Ahmed visited a treatment centre, as well as Grand Cape Mount, which has seen a recent flare-up of cases.

“My visit to the treatment centre has confirmed that we still have in certain places figures which for us are too high,” said Mr. Ould Cheikh Ahmed, as he stressed the need to “stay alert” and keep up the same degree of mobilization from the Government and international community.

In the hard-hit West African region, some 8,220 have died from the Ebola outbreak, according to the latest figures from the UN World Health Organization (WHO).

Ebola response is and should be a “Government-driven battle” as it is “about their people, about the fate of their country,” UNMEER’s chief told reporters. Recognizing the role of countries is crucial as is supporting the grassroots efforts of stricken communities.

“If we do not tackle this at the community level, there will be no zero-Ebola achievement. The community leaders, religious leaders and the communities themselves must not only acknowledge the existence of Ebola but also the battle it will take to win that behavioural change against a very limited amount of time.”

He said that so far he has seen when he met survivors and leaders is that there is strong resolve there which must be “sustained and maintained.”

The last “C” of his “3C approach”, which he hopes to be leading, is coordination. “There are a lot of actors coming to this, many with very good intentions. But we are too many and sometimes when there are too many cooks in the kitchen it is very difficult to get the meal out. We have to coordinate ourselves, we have to organize better,” he stressed.

At the same time, he said a lot is also owed to the Liberians themselves, “their determination, their will and their strength.”

“The Liberians have made this their battle. The people I have met with are at the community level are leaders of the communities or religious leaders, imams, church leaders. All of them have extraordinary resolve.”

Welcoming Mr. Ould Cheikh Ahmed to his new post, Dr. Nabarro said that this is his sixth time in West Africa since starting work as UN System Coordinator on Ebola in August. Progress has been achieved by the people and Government of Liberia, communities, first responders, doctors, nurses and other health workers. And the people who have recovered from Ebola are “now the real Ambassadors.”

“The numbers do tell an important story. In the middle of September the epidemiology said that there were about 80 new cases per day of Ebola in this country. It fluctuated and perhaps some days were worse than others. But just at the moment the figure is certainly less than five per day and possibly lower,” Dr. Nabarro explained.

The next phase is to start to look at where the virus is, find the people who are not well and support them, trace their contacts and get a much deeper understanding of the outbreak.

“This next stage is pretty difficult because the only solution for all of us is [to ensure] that Ebola is not present in humans in this region, as quickly as possible. So we really have to work together to find everybody. And there are flare-ups occurring such as in Grand Cape Mount…so we have to stay super vigilant.” 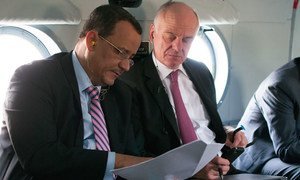 The new Head of the United Nations Mission for Ebola Emergency Response (UNMEER), Ismail Ould Cheikh Ahmed, arrived in Liberia today as part of his first tour of the countries in West Africa most affected by the outbreak of the virus.