Dilawar Khan Dilawar/UNAMA
UNHCR and its partners in Afghanistan begin distribution of cold-weather supplies to some of the most vulnerable in the south-eastern Paktya province.

7 January 2015
As the United Nations refugee agency (UNHCR) and its partners begin distributing cold-weather supplies to some of Kabul’s most vulnerable residents, the Agency’s representative in Kabul has warned that many people, especially children, are continuing to suffer, particularly those living in Kabul’s informal settlements.

“Whilst aid agencies, under the joint leadership of the Government of Afghanistan and OCHA [UN Office of Coordination of Humanitarian Affairs], work closely to help respond to the immediate needs of the most vulnerable people, displaced families across the country as well as returnees continue to face many other complex challenges,” said Bo Schack, UNHCR Representative in Afghanistan.

Severe weather, including rain, snow and sub-zero temperatures, hit parts of Afghanistan during winter, particularly impacting the living conditions of the urban poor and the 782,000 people internally displaced by conflict in the country – a figure that includes 130,000 recorded as newly displaced in 2014.

“UNHCR hopes that the newly endorsed National Policy on Internally Displaced Persons will lead to renewed efforts to find real and long-term solutions to these displaced people,” Mr Schack said. “The longer-term reintegration of IDPs [internally displaced persons] and Afghan refugee returnees in Afghanistan requires the continued support of the Government and development agencies. A serious commitment to solving this problem is essential.”

The situation in the capital’s informal settlements remains of concern and the UNHCR joined the Afghan Ministry of Refugees and Repatriation (MoRR) and other humanitarian partners in giving out warm clothing, heating material, kitchen-sets and dignity kits to over 2,300 internally displaced and returnee families in distribution centres in the city today.

A total of around 6,000 families in Kabul City are expected to benefit from the winterization assistance, a mix of vulnerable recently returned refugees and internally displaced people, as well as others at particular risk in the cold winter weather such as the disabled, the elderly and single mothers.

The agency’s efforts are part of a coordinated response to provide winterization assistance to over 32,000 displaced families – 225,000 individuals – across the country, with a focus on the most vulnerable people and on remote and isolated areas in the Western, Central, Central Highland, Southern and South-Eastern Regions, some of which are cut off from the rest of the country during the winter months. 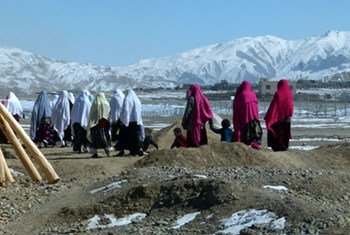 2 January 2015
United Nations Secretary-General Ban Ki-moon has condemned in the “strongest terms” the recent shelling that hit a wedding party in Afghanistan and reportedly killed 25 people and wounded 45 others.