Ban outraged by 'horrendous and cold-blooded' attack on French magazine

“I am appalled and deeply shocked by the attack against Charlie Hebdo in Paris this morning,” Mr. Ban said. “This act of violence can in no way be justified. This is an attack against freedom of expression and freedom of the press - the two pillars of democracy.”

According to media reports, masked gunmen opened fire with assault rifles in the office of Charlie Hebdo in central Paris, reportedly killing four of the magazine's cartoonists and its editor. The unidentified gunmen were reported to have then fled the scene, exchanging shots with police in the street, killing two officers.

In remarks delivered during a New Year visit to the UN Correspondents Association, the Secretary-General extended his deepest condolences to the families of the victims, stressed

his solidarity with the Government and people of France and said he trusted the French authorities to do all in their power to bring the perpetrators to justice quickly.

“This horrific attack is meant to divide. We must not fall into that trap,” he said. “This is a moment for solidarity. Around the world, we must stand strong for freedom of expression and tolerance and stand against forces of division and hate.”

Mr. Ban's comments were echoed by other senior officials from across the Organization, with the UN High Commissioner for Human Rights, Zeid Ra'ad Al Hussein, also speaking out against what he described as an “appalling and ruthless attack,” while underlining the importance of arresting and punishing those responsible and refraining from attaching blame to any wider group.

“If this attack is allowed to feed discrimination and prejudice, it will be playing straight into the hands of extremists whose clear aim is to divide religions and societies. With xenophobia and anti-migrant sentiments already on the rise in Europe, I am very concerned that this awful, calculated act will be exploited by extremists of all sorts.”

He stressed that freedom of expression and opinion are cornerstones of any democratic society and said those trying to divide communities on grounds of religion, ethnicity or any other reason must not be allowed to succeed.

Irina Bokova, Director-General of the UN Educational, Scientific and Cultural Organization (UNESCO), also said she was horrified by the “attack against the media and against freedom of expression.”

Ms. Bokova's statement said she was horrified by the incident, which was more than a “personal tragedy” and which provided more motivation to bring the perpetrators to justice.

“UNESCO is more determined than ever to protect the free and independent press,” she said. “The international community cannot let extremists sow terror and prevent the free flow of opinions and ideas.”

Later in the day, UNESCO announced that it had lowered the flag to half-mast at its Paris headquarters in solidarity with France, and in respect for those killed and injured. Mr. Bokova paid homage to the 12 victims of the “savage attack,” including four renowned cartoonists, Georges Wolinski, Jean Cabut (Cabu), Bernard Verlhac (Tignous) and Stephane Charbonnier (Charb).

“Never before has one media outlet been so deliberately targeted and its staff decimated in an act of such extreme violence,” the Director-General said. “Today's unprecedented and horrifying attack is a tragic reminder to us all that the right to freedom of expression is fragile, and that those who defend it may pay the ultimate price for doing so.”

“At the same time, the spontaneous demonstrations that this appalling crime has provoked across France and around the world - the outpouring of sorrow and anger expressed by citizens from all faiths - also reveal that freedom of expression is a right that is cherished, and understood by all as being at the heart of healthy, functioning societies,” Ms. Bokova said.

In a statement issued by the President of the General-Assembly, Sam Kutesa, he condemned the attack in the strongest terms, underlining the need for every effort to be made to ensure that journalists can do their work in a safe and enabling environment and that crimes against them are prosecuted.

The members of the Security Council called the terrorist attack “barbaric and cowardly” and condemned the “intolerable” targeting of journalists and a newspaper in a press statement released following the attack.

“The members of the Security Council reaffirmed the need to combat by all means, in accordance with the Charter of the United Nations, threats to international peace and security caused by terrorist acts, and that any acts of terrorism are criminal and unjustifiable, regardless of their motivation, wherever, whenever and by whomsoever committed,” the statement said. 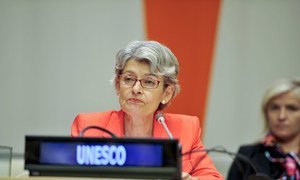 The head of the United Nations agency mandated to defend freedom of expression and press freedom today deplored the killing of journalist Robert Chamwami Shalubuto in Goma in eastern Democratic Republic of Congo (DRC).