The Joint United Nations and African Union Mission in Darfur has reported that its peacekeepers came under two separate attacks today while on patrol, both times by unidentified gunmen.

The first attack occurred in the Burumburum area, about 11 kilometres north-east of Khor Abeche, in South Darfur. Two attackers were killed in the firefight, according to the Mission, known as UNAMID.

“There was no injury to any of the peacekeepers or damage to mission property.

The Mission reports this is the second attack on UNAMID in this area in as many months,” the Secretary-General’s spokesperson told reporters at a Headquarters briefing this afternoon.

UNAMID’s Acting Joint Special Representative, Abiodun Oluremi Bashua, commended the peacekeepers for their robust response to the attackers and called on the Government of Sudan to speedily investigate the incident and bring the perpetrators to justice.

Also today, another UNAMID patrol was attacked at a water point by a group of unidentified assailants about 5 kilometres south-west of the Mission team site in Habilla, in West Darfur.

The peacekeepers did not sustain any injuries but the attackers seized a water tanker and a vehicle. 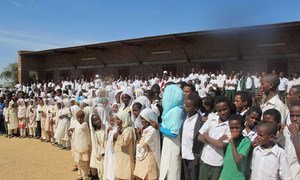 The United Nations-African Union Hybrid Mission in Darfur (UNAMID) has launched a campaign throughout the western region of Sudan against the recruitment of children as soldiers with an event that was attended by more than 1,000 people.