31 December 2014
Falling short of the required number of positive votes and faced with a veto from one of its permanent members, the United Nations Security Council today failed to adopt a draft resolution that would have affirmed the “urgent need” to reach within 12 months a peaceful solution to the situation in the Middle East and would have paved the way to a Palestinian state with East Jerusalem as its capital.

The draft also outlined several parameters for the proposed solution – with a one-year deadline for negotiations with Israel and a “full and phased withdrawal of Israeli forces” from the West Bank by the end of 2017 – and would have looked forward to welcoming Palestine as a full UN Member State within the 12-month timeframe, urging both parties to build trust and negotiate in good faith.

While the resolution failed to receive the required majority among members, the United States also opposed the text, a move that would have seen the draft fail to pass.

Following the vote, Samantha Power, Permanent Representative of the US to the UN, stressed her country’s support for new ways to constructively support both parties in achieving a negotiated settlement.

“This resolution is not one of those constructive steps,” she said, adding that the draft set the stage for “more division, not compromise.”

The vote set-up a “staged confrontation” that did not contribute to a peaceful resolution of the Palestinian question, especially as the text was “deeply imbalanced”, establishing “unconstructive deadlines.”

Five Council members abstained from the vote, including the United Kingdom, whose representative, Mark Lyall Grant, said he supported much of the draft’s content but was disappointed by the lack of negotiation and had therefore abstained.

“The Security Council has once again failed to uphold its Charter duties,” said Riyad Mansour, Permanent Observer for the State of Palestine, who said the draft was tabled in the face of a political impasse caused by “Israeli intransigence.”

Israel’s representative said the opposite was true, with the Palestinians having “every chance to negotiate.” Having refused to engage, they had now tabled their “preposterous unilateral proposal,” and he warned his Palestinian counterpart that he could not “agitate and provoke” his way to a State.

María Cristina Perceval, the representative of Argentina, said explanation of her affirmative vote was “unnecessary” and lamented the Council’s failure to adopt the text, while Chad’s representative, Mahamat Zene Cherif, current Council President, said the draft was “balanced and moderate” adding that the Council had “once more missed a date with history”, sending a negative message that encouraged continuation of occupation, injustice and oppression. The Council, he said, had missed an opportunity give the Palestinians “a ray of hope” after direct talks yielded almost nothing. 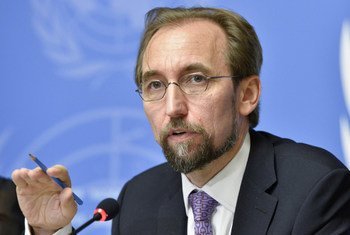 12 December 2014
Reports of excessive use of force by Israeli security forces in the Occupied Palestinian Territory have risen sharply, said the United Nations High Commissioner for Human Rights as he urged Israel to take steps to halt this “continuous stream of fatal incidents” and to launch a quick and “utterly transparent” investigation into the matter.