Strife-torn Central African Republic is showing signs of moving towards broad national dialogue – a direction prescribed by the Security Council as critical to ensure lasting peace – the Special Representative of the United Nations Secretary-General for the country has said today.

“If I had to summarize in one word what inspires me on December 30, 2014, that word would be ‘hope,’” Babacar Gaye said during a press conference today in Bangui.

He referred to a Security Council Presidential Statement of 18 December that reiterated the Council’s call for disarmament of all parties and dialogue as the only route to lasting peace.

“We are moving in the direction indicated by the Security Council,” Mr. Gaye said, pointing to the recent consultations and the prospect of gathering the Bangui Forum, which he said were the “backbone” of his faith in the peace process.

The UN Multidimensional Integrated Stabilization Mission in the CAR (MINUSCA) was mandated to protect the population, to support the political process and to support restoration of state authority. He pointed to “tangible advances” in protection of the population, notably the deployment plan for forces in the country.

“We do not yet have a full house but personally I am satisfied with the attitude and the results already achieved by our forces,” he said, noting that 764 interventions had been carried out, along with 244 arrests, 50 of which were for illegal possession of weapons.

He also noted that despite clashes in Berbarati, peacekeeping forces had intervened “very robustly.”

“Notorious criminals were arrested. They have already been transferred or are being transferred to Bangui. This attitude is positive, it will continue,” he said.

Reconciliation efforts continued in the country’s East and centre, including an agreement in Bambari between parties to make peace in the city and he underlined that the Mission’s role in prevention, along with its ‘good offices’ mandate, superseded its capacity for intervention.

Conciliation efforts continued in the country’s East and centre, including an agreement in Bambari between parties to make peace in the city and he underlined that the Mission’s role in prevention and providing ‘good offices’ superseded its intervention mandate.

The Mission’s pursuit of the restoration of State authority was broad and extended beyond support for the Government. Mr. Gaye said he was pleased at the mobilization of 200 million CFA francs for a rapid impact project in a northern district of Bangui, despite the recent death of a taxi driver there.

“Such situations are, unfortunate jolts that will continue, but at a much lower frequency because there are forces such as the FPU [Formed Police Unite] involved immediately at the scene and working to calm such situations,” he said, adding that although the path would remain a difficult one, the population aspired to peace and stability and that gave him hope. 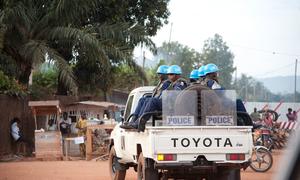