The United Nations Special Coordinator for Lebanon, Derek Plumbly, met in Beirut today with Prime Minister Tamam Salam to discuss the grave security challenges faced by the country this year, as well as progress made to promote dialogue between political parties.

“We discussed today the security situation, including the implementation of resolution 1701 and the crucial role played by the army both in the south and elsewhere in the country,” said Mr. Plumbly.

In 2006, the Security Council unanimously adopted resolution 1701 calling for an end to hostilities between Hizbollah and Israel.

“I paid tribute to Lebanon’s security forces, particularly the army, for all the efforts and sacrifices they have made to safeguard the country in the face of grave challenges this year. I also warmly welcomed the progress made in securing international support for the Lebanese army, which has been a core concern for the United Nations.”

Mr. Plumbly also thanked the Prime Minister for his role in finalizing and launching with the UN Deputy Secretary-General Jan Eliasson the Lebanon Crisis Response Plan earlier this month.

“We discussed what steps need to be taken to help ensure an appropriate and sufficient international response to the plan,” the Special Coordinator said.

Mr. Plumbly welcomed the initiatives under way with respect to dialogue between political parties in Lebanon, including the dialogue meeting held last week between the Future Movement and Hizbollah under the auspices of the Speaker of the Parliament.

“Clearly dialogue is important for unity and stability in these difficult times. We very much hope that these steps will contribute to resolving outstanding issues, and in the first place the vacancy in the presidency,” he said. 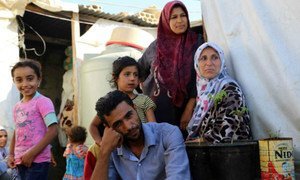 Lebanon: UN deputy chief pledges to ‘help as much as possible’ with refugee impact

With soaring numbers of refugees seeking asylum in Lebanon, United Nations Deputy Secretary-General Jan Eliasson today pledged to “help as much as possible” to ensure that the tragic conflict in Syria will not spread into Lebanese society.