The UN has condemned an attack on the African Union Mission in Somalia (AMISOM), which resulted in the death of a number of AMISOM soldiers and civilian contractors.

In a statement issued by his spokesperson, Secretary-General Ban Ki-moon strongly condemned the attack which took place yesterday on the AMISOM base camp, located in Mogadishu’s international airport.

“The Secretary-General conveys his sincere condolences to the families and friends of those who have lost their lives, and wishes a swift recovery for the injured,” today’s statement said.

The AMISOM base camp inside Mogadishu Airport was infiltrated by Al-Shabaab militants dressed in Somali army uniforms, the UN Assistance Mission (UNSOM) in the country has confirmed. During the gun fight, three AMISOM soldiers and two civilian contractors were killed.

Commending AMISOM for its quick response to the attack, the Secretary-General expressed solidarity with the African Union Mission and with UN personnel working for peace in Somalia, reaffirming the United Nation’s “resolve to support the Government and people of Somalia in their continuing journey toward peace and stability.”

Special Representative of the Secretary-General for Somalia (SRSG), Nicholas Kay, who heads the UN Assistance Mission in Somalia (UNSOM), confirmed in a statement that all UN staff are safe and sound. The airport also hosts the UN Headquarters for Somalia.

In an interview today with UN Radio, Aleem Siddique, a spokesperson for UNSOM, described how a group of Islamic gunmen had attacked the base. “The terrorists, some of whom were dressed in Somalia National Army uniforms, breached the base camp around lunchtime yesterday and attempted to gain access to critical infrastructure, during which five of them were killed and three were captured,” Mr. Siddique said.

“This attack is a reminder of the important work that we’re doing here, and that we will not be deterred by this attack. Our commitment to the Somali people and to the Federal Government of Somalia remains strong. There’s a lot of important work for us to do here,” he added. 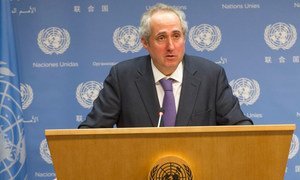 United Nations Secretary-General Ban Ki-moon today welcomed the Parliamentary endorsement of Omar Abdirashid Ali Sharmarke as the new Prime Minister of the Federal Republic of Somalia in a step towards resolving the country’s current political crisis.