UNMEER/Sandra Miller
Emergency personnel try to contain a fire on 18 December 2014 at a warehouse at the main humanitarian logistics base in Conakry, Guinea, which contained critical Ebola response supplies.
24 December 2014

The UN Mission for Ebola Emergency Response (UNMEER) has reported that a main United Nations logistics hub managed by the World Food Programme (WFP) in Guinea is fully operational despite the fire that swept through the facility last week threatening medicines and laboratory materials used in the fight against Ebola.

The warehouse fire was discovered around 8:00 a.m. local time on 18 December when workers arrived at the facility in the main humanitarian logistics base of the airport and of the city of Conakry, the capital of Guinea – one of the three most affected countries by Ebola in West Africa.

“WFP has assured partners that, despite the fire last week, Conakry main logistics hub is operating at full capacity,” UNMEER stated in its latest situation report on the Ebola outbreak. “The cold chain capacity has already been re-established via the setup of donated refrigerated 40 foot containers.”

The news followed UN reports regarding the spread of the Ebola virus across West Africa.

According to the latest update released today by World Health Organization (WHO), 19,497 people have now been affected by Ebola, with 7,588 reported deaths, including 666 health-care workers who are known to have been infected up to the end of 21 December, 366 of whom have died.

In addition, WHO noted that reported cases were fluctuating in Guinea and decreasing in Liberia, and that there were “signs” that the increase in incidence had slowed in Sierra Leone although, the agency added, the country’s west was “now experiencing the most intense transmission in the affected countries.”

Against that backdrop, the UN Mission in Liberia (UNMIL) today reported that a fourth staff member had tested positive for Ebola. Two of the affected mission personnel died of the disease three months ago, while another member of UNMIL’s personnel who contracted the disease has recovered and was discharged from hospital this week.

Karin Landgren, UNMIL’s chief, said in a statement that Liberians could be proud of the progress they had made in fighting the disease but urged them to “take extra care as they gather with friends and families over the holidays,” especially in light of the newly reported infection.

“The confirmation of this new case is a stark reminder that we must all remain vigilant until there are no cases in Liberia or West Africa,” her statement continued. “The mission is taking all necessary measures to mitigate any possible further transmission – both within the mission and beyond.” 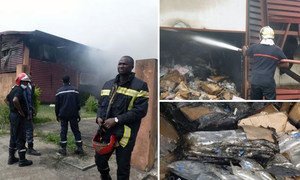