The extensive destruction and damage of Syria’s historical and cultural heritage sites demands increased efforts to protect them from the violence of the country’s continuing conflict, a new United Nations report based on exclusive satellite imagery has revealed.

The report – a comprehensive study compiled by the Operational Satellite Applications Programme (UNOSAT) of the UN Institute for Training and Research (UNITAR) – reviews 18 different cultural heritage areas. A total of 290 locations in these areas were found to have been directly affected by the hostilities over that past three years.

Out of the 290 locations, the report says, 24 have been destroyed; 104 severely damaged; 85 moderately damaged; and 77 possibly damaged.

“At this point in time we found it important to issue a comprehensive status report to alert decision-makers and the public of deterioration to many of the rich cultural heritage areas in Syria,” Einar Bjorgo, Manager of UNOSAT, explained in the press release.

“That widespread destruction and damage we have observed calls for increased protection efforts and support to the ongoing work of UNESCO [UN Educational, Scientific and Cultural Organization],” he added.

Cultural heritage areas such as Aleppo, where settlements have been in place for over 7,000 years, Damascus, Crac des Chevaliers, Raqqa and Palmyra have all been exposed “to major damage,” a UNITAR press release noted, adding that further looting and destruction from aerial bombardments and other explosions “significantly threatens the heritage to future generations of these historic structures and objects.”

Satellite imagery of the old city of Aleppo alone shows a devastating scene as the Great Umayd Mosque is visibly damaged and its minaret destroyed. Meanwhile, the location of the famous Carlton Hotel shows a proliferation of craters present.

“UNITAR-UNOSAT’s analysis is an alarming testimony of the ongoing damage that is happening to Syria’s vast cultural heritage,” the press release continued. “National and international efforts for the protection of these areas need to be scaled up in order to save as much as possible of this important heritage to human-kind.”

The UN agency has made a special web site available for the public featuring satellite imagery samples and its other findings. 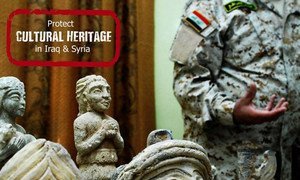 Denouncing the persecution of minorities, attacks on cultural heritage and illicit trafficking in cultural properties in Iraq and Syria as “part of a strategy of deliberate cultural cleansing of exceptional violence,” the head of the United Nations cultural agency today urged the creation of “protected cultural zones” around heritage sites in the two crisis-riven countries.