Christmas will be “like any other working day” for United Nations humanitarian worker Chris Huddart, who – like thousands across West Africa – is spending the holiday responding to the Ebola outbreak.

Mr. Huddart, who is from the United Kingdom, works as a programme officer with the World Food Programme (WFP) in Liberia, one of the countries hardest hit by the outbreak. “Sadly, any sign of Christmas is lacking this year” in Liberia, he said in an online interview, noting that the country is fighting Ebola with a crumbling healthcare system, a lack of doctors and nurses, and a lack of equipment.

“Christmas here is usually a real community event but Ebola has affected many people – not only those that have died or lost family members, but also the medical staff who are working day and night at Ebola treatment units, and those people who have had their livelihoods ripped from their hands because they can’t work,” he said.

As for himself, Mr. Huddart said: “For me Christmas will be like any other working day.”

“I will wake up early and get ready for work,” he said. “If there is water I’ll take a shower – if not I’ll use the hand sanitizer under the armpit trick! After checking the news and the latest Ebola infection rates, I’ll go into the office.”

As for his Christmas wish, Mr. Huddart said: “Although I wish it would, I don’t think Ebola will disappear overnight – I rather suspect that there may always be one or two cases that emerge now and then – but I hope for it to cease being a humanitarian crisis.”

The latest statistics issued today by the World Health Organization (WHO) say that 19,431 people have been affected by Ebola, with 7,565 deaths.

The UN Mission for Ebola Emergency Response (UNMEER) today reported that an outbreak of 50 confirmed cases in a number of villages of Kissidougou prefecture in Guinea prompted the mobilization of additional ambulances as well as response experts by the Guinean National Ebola Response Cell and WHO to deal with contact tracing, social mobilization and communication, body disinfection and safe burials.

Also, a Rapid Isolation and Treatment of Ebola team has been flown in to follow up on reports that a 12-year-old girl with Ebola crossed the border from Guinea into Nimba county, Liberia, according to UNMEER.

UNMEER also reported that Sierra Leone is withdrawing its troops from Somalia after the African Union blocked the West African country from rotating its soldiers over fears for Ebola. Sierra Leone sent 850 troops to Somalia in 2013 for a 12-month deployment.

Also today, a Dutch navy transport vessel is scheduled to arrive in Sierra Leone with cargo made up of logistics assets key to the implementation of the response, such as trucks, 4x4 vehicles and ambulances, and WFP is stepping up its support to WHO in that country.

UNMEER noted that in the last 21 days, there have been 1,507 new cases Ebola in Guinea, Liberia and Sierra Leone with 1,058 deaths, and the most new cases were in Sierra Leone, where these figures were 1,069 and 667, respectively.

Meanwhile, a peacekeeper from Nigeria who had contracted Ebola and was then evacuated to the Netherlands earlier this month has now returned to the UN Mission in Liberia (UNMIL) to resume his duties following a full recovery. 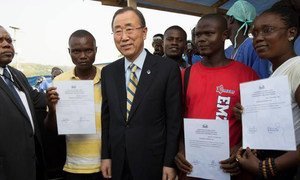 Courage of Ebola health workers should inspire greater efforts by all, says Ban

Citing the “memorable and moving” example of a Sierra Leonean nurse who had contracted Ebola but became a caregiver as soon as she had recovered, United Nations Secretary-General Ban Ki-moon said today that kind of commitment “should move us all to do more to end the outbreak” in West Africa.