As Pakistan lifted a six-year moratorium on use of the death penalty following the recent terrorist attack in Peshawar, United Nations human rights experts today warned against rescinding such suspensions and stressed the risks of overusing capital punishment for terrorist acts.

Pakistani Prime Minister Nawaz Sharif cancelled the unofficial ban on executions for non-military personnel ‘in terrorism-related cases’ after an attack last week by the Pakistani Taliban on a school killed 148 people, almost all children. The country is reportedly planning to execute around 500 convicts who have exhausted all their appeals.

The UN Special Rapporteurs on summary execution, torture, and human rights and counter terrorism said in a news release that they are alarmed about the lifting of the bans on the death penalty as well as adoption of new laws to impose the punishment for acts of terrorism.

“The removal of moratorium on death penalty and the adoption of new anti-terrorist legislation is a step back on the total abolition of the death penalty in the world,” the experts said.

The UN Special Rapporteur on extrajudicial, summary or arbitrary executions, Christof Heyns, drew attention to the possible overuse of anti-terrorist laws by Pakistani authorities, which may apply death sentences for crimes that do not meet the most serious crimes requirement.

“The definition of acts of terrorism in the Pakistani legislation remains very vague. Hundreds of people charged with such acts are at risk of being executed,” he warned. “I ask Pakistan to continue the moratorium on actual executions and to put in place a legal moratorium on the death penalty, with a view to its abolition.”

Mr. Heyns’s call was echoed by Juan E. Méndez, the Special Rapporteur on torture and other cruel, inhuman or degrading treatment or punishment, who pointed to the growing international and State-level practice of framing the debate about the legality of the death penalty within the context of human dignity and the prohibition of torture.

“I call upon Pakistan and all States to reconsider whether the use of the death penalty per se respects the inherent dignity of the human person, causes severe mental and physical pain or suffering and constitutes a violation of the prohibition of torture and other cruel, inhuman or degrading treatment or punishment,” Mr. Méndez stated.

Ben Emmerson, the UN Special Rapporteur on the promotion and protection of human rights and fundamental freedoms while countering terrorism, underlined the need for States to comply with international law relating to imposition of the death penalty even in the face of terrorist attacks.

“Any trial for terrorism offences which could lead to the imposition of the death penalty, including all stages before the trial and the consideration of appeals on matter of fact and law after the trial, must rigorously comply with all aspects of a fair trial,” he said. 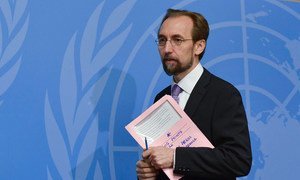 The top United Nations official on human rights issues voiced “deep regret” today over the resumption of executions in Pakistan and Jordan at a time when the international community is increasingly turning away from the use of the death penalty.