After weeks of effort and engagement with authorities, the United Nations said today that it has helped a group of Vietnamese Montagnards who had been hiding in the Cambodian forests since October with little protection and subsistence get to safety.

Ravina Shamdasani, spokesperson for the Office of the High Commissioner for Human Rights (OHCHR), told reporters in Geneva that the group of 13 had tried to seek asylum in Cambodia after they told local sources that they fled religious persecution in Viet Nam. However, provincial authorities in Cambodia warned that if they were caught, they would be deported back to Viet Nam.

Last week, the Montagnards had communicated that they were ready to come forward, with the presence of the UN. Early on Saturday morning, a group of eight Montagnards, including one woman, had presented themselves to a joint team of UN and local authorities.

Later that day, the UN team of three human rights officers and one driver scoured the jungle to search for the other group of five who wished to present themselves to the UN. Provincial police later informed the team that the group was being held in custody. The five were handed over to the joint team that evening.

“When our team found them, the 13 Montagnards were thin, exhausted, dishevelled and complaining of various health problems after more than seven weeks of sleeping rough on the forest floor with little to eat,” said Ms. Shamdasani.

The asylum claims of the 13 people are now being processed by the Cambodian Government’s Refugee Department.

“We acknowledge with appreciation the cooperation of the provincial law enforcement authorities in the final instance, when they ultimately allowed the last five to apply for asylum. We will continue to work with the Government to ensure that any future cases are handled in line with the standards required by international law.” 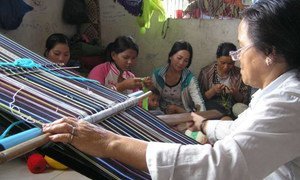 Cambodia: ‘Substantial grounds’ to believe Montagnards may be in danger, UN warns

The United Nations agencies responsible for human rights and refugees are voicing concern today over the health and well-being of 13 Vietnamese Montagnards who have been hiding in the Cambodian jungle for more than seven weeks with no access to assistance or protection.