UN Photo/Loey Felipe
A wide view of the Security Council during a briefing on the situation in the Democratic People’s Republic of Korea (DPRK).
22 December 2014

Despite a grim litany of human rights abuses committed against its own people and ongoing provocations to global peace and security, the Democratic People’s Republic of Korea (DPRK) has shown signs of compliance with human rights mechanisms prompting hopes that the Asian nation may one day yield to the call for full accountability and reform, two senior United Nations officials stated today.

Briefing the Security Council on the situation in the DPRK, Assistant Secretary-General for Human Rights Ivan Šimonović highlighted the “widespread and systematic” crimes perpetrated by the Pyongyang Government, as detailed in a recent report produced by the UN Commission of Inquiry on human rights in the DPRK.

“Rarely has such an extensive charge-sheet of international crimes been brought to this Council’s attention,” he told the 15-member body, which decided in an 11-2-2 vote at the outset of the meeting to put the issue on its provisional agenda.

“It documents a totalitarian system that is characterized by brutally enforced denial of the right to freedom of thought, conscience and religion, as well as the rights to freedom of opinion, expression, information and association.”

In its report, the Commission found that the DPRK “displays many attributes of a totalitarian State,” with State surveillance permeating private lives and virtually no expression critical of the political system going undetected – or unpunished. Military spending – predominantly on hardware and the development of weapons systems and the nuclear programme – has always been prioritized, even during periods of mass starvation, the report added.

Referring to a 2013 survey conducted by the UN’s Food and Agriculture Organization (FAO) and World Food Programme (WFP), Mr. Šimonović explained that 84 per cent of households in the DPRK were not consuming enough food. Moreover, he noted, the State’s political prison-camp system – which the Commission estimated contained up to 120,000 people – imposed deliberate starvation, forced labour, executions and torture upon its inmates.

The UN official also reaffirmed the Commission of Inquiry’s suggestion that the DPRK’s human rights situation and the security situation in the region were inextricably linked.

“Comprehensive human rights violations by the DPRK have had a significant impact on regional peace and security, from international abductions and enforced disappearances to trafficking and the outflow of desperate refugees,” he continued. “If we are to reduce tension in the region, there must be movement towards real respect for human rights in the DPRK.”

Nonetheless, Mr. Šimonović voiced optimism that a reversal in the status quo was still possible amid “promising new signs” of the DPRK authorities’ engagement with international human rights mechanisms. The country’s representatives had engaged productively with the UN Human Rights Council’s Universal Periodic Review and held an “unprecedented” meeting with the UN Special Rapporteur. At the same time, he said, Pyongyang had reopened investigations into alleged abductions of Japanese nationals.

“All these developments may present an opportunity for real change,” he stated. “Other countries in the region have shown in the recent past that it is possible to dismantle deep-seated structures of repression and receive assistance in reform, leading to new recognition and standing in the international community.”

Also briefing the Council was Assistant Secretary-General for Political Affairs Tayé-Brook Zerihoun, who agreed, noting that the situation provided an opening to restart credible dialogue in order to help overcome the current standoff on the Korean Peninsula.

“These signals of engagement offer an important opportunity for the United Nations and the wider international community to redouble efforts towards building trust, dialogue and cooperation on all tracks,” Mr. Zerihoun declared. “It is also an opportunity for the DPRK to work with the international community to improve the human rights situation and the living conditions of the people of the country.”

For his part, Mr. Šimonović called for greater Council engagement on the situation in the DPRK now that it had been presented with the Commission’s report in order to advance what he said were “two crucial goals: accountability and engagement for reform” in the country.

“Concerted actions by the international community can have a powerful deterrent effect and may begin to change the policy of the DPRK,” he said, adding that the UN body should continue to “carefully” monitor developments in order to see whether engagement will lead to real change or whether it should take action by referral to the International Criminal Court and by adopting targeted sanctions.

“The people of the DPRK have endured decades of suffering and cruelty. They need your protection. And the cause of justice, peace and security in the region requires your leadership.” 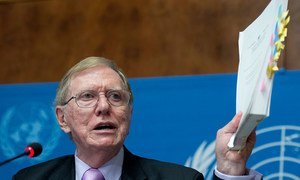