'Suffering an enormous human cost', civilian casualties up nearly 20 per cent in 2014 – UN

Civilian casualties in Afghanistan increased by nearly 20 per cent in 2014 compared to the previous year and are expected to rise to a figure over 10,000 by end of December – for the first time since the UN mission in the country began keeping record in 2008.

“Men, women and children are suffering an enormous human cost as the transition evolves in Afghanistan,” Georgette Gagnon, the Director of Human Rights at the UN Assistance Mission in Afghanistan (UNAMA) said in New York today as she briefed journalists at UN Headquarters.

UNAMA documented from 1 January 2014 to the end of November 9,617 civilian casualties which includes 3,188 civilian deaths and 6,429 civilian injuries.

“Why do we document injuries? Because they devastate families, communities and individuals, leaving many with very serious physical disabilities and affecting family livelihoods and futures,” Ms. Gagnon said.

Compared to 2013 child casualties jumped 33 per cent and women civilian casualties increased 14 per cent. What's different in 2014 is that the majority of civilian casualties have been caused in ground engagements and fighting between Afghan forces and insurgents, followed by deaths and injuries caused from improvised explosive devices.

“As with previous years, 75 per cent of civilian casualties we attribute to the insurgents, the Taliban, the Haqqani network and other insurgent groups; 12 per cent to pro-Government forces, 11 per cent to ground engagements where the party that caused the civilian casualties cannot be determined and the remainder to unexploded ordinates that are left after ground engagements,” Ms. Gagnon said.

UNAMA continues to advocate and lobby all parties particularly “anti-government elements” to do much more to abide by their legal obligation under international law and under Afghan law to reduce civilian casualties and to not attack civilians either deliberately or indiscriminately.

“Civilian casualties are particularly tragic and a prominent part, even benchmark, of the horror and the violence that ordinary Afghans face,” said the Head of UNAMA, Nicholas Haysom who joined Ms. Gagnon at the briefing.

He stressed that the scale of the problems that Afghanistan faces in 2015 requires a “level of common purpose and unity” without which the embattled nation will simply not be able to meet its challenges.

Insecurity has surged in the country in recent months but other challenges persist. For instance, Afghanistan will be going into 2015 carrying quite significant amount of debt. The country must look for additional resources to implement its ambitious reform programme which demonstrates a thorough commitment to tackle corruption and establish governance through-out much of the country and embark on a much more in-depth programme of delivering services to the people.

“The failure to properly tackle this ongoing liquidity crisis is something that will be an exercise for the Government and international donors in the next few months,” he said.

Mr. Haysom briefed the Security Council yesterday on the situation in Afghanistan. He said compared to the last Council meeting on the matter, there has been a significant improvement in the Central Asian nation.

For instance, Afghanistan is no longer “locked at an electoral impasse that threatened to divide the country at best and at worst to reopen a pattern of cycles of violence”. Winners have been announced in both provincial council elections and presidential council elections, and UNAMA expressed support for the Afghanistan's Government of National Unity.

Additionally, the BSA (Bilateral Security Agreement) signed back in September paves the way for the deployment of the NATO resolute support mission. Afghan's President Ashraf Ghani and its Chief Executive Officer Abdullah Abdullah have conducted an extensive tour of the region in which they have been able to present a carefully thought-out and bold programme for reform.

This has impressed international delegates to illicit a very firm affirmation of support for Afghanistan in the foreseeable future, he added. The Government has also managed to engage with the region to secure support both in regard to its economic integration and connectivity with the region and its security challenges. 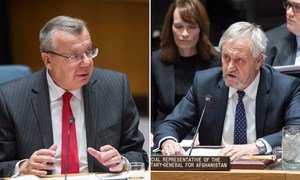 As Afghanistan builds upon recent political developments, including the formation of a unity government, the country’s authorities and the international community must not ignore the immense challenges that lie ahead, from simmering insecurity to an escalating drug crisis, two senior United Nations officials declared today during their briefing to the Security Council.