UNMEER/Sandra Miller
Emergency personnel try to contain a fire on 18 December 2014 at a warehouse at the main humanitarian logistics base in Conakry, Guinea, which contained critical Ebola response supplies.
18 December 2014

"This is a regrettable loss, but no one was hurt and we will move quickly together with our partners to replace the lost supplies", said Anthony Banbury, Head of the UN Mission for Emergency Ebola Response (UNMEER).

"We certainly won't be deterred in our fight against Ebola," he said.

UNMEER reported that the fire in the warehouse, mainly containing medicines and laboratory materials, was discovered around 8:00 a.m. local time when workers arrived at facility in the main humanitarian logistics base of the airport and of the city of Conakry, the capital of Guinea – one of the three most affected countries by Ebola in West Africa.

No casualties had been reported, the mission said, and added that the personal protective equipment stored in tents next to the warehouse had not been touched by the fire.

The exact amount of property and material damaged as a result of the fire is not yet known, and an investigation into the fire was underway, according to UNMEER.

The fire in Guinea comes ahead of the trip by UN Secretary-General Ban Ki-moon who is on his way to West Africa, where he will visit the Ebola-affected countries over the next few days.

Accompanied by the Director General of the World Health Organization (WHO), Dr. Margaret Chan, as well as his Special Envoy dealing with Ebola response, Dr. David Nabarro, Mr. Ban is scheduled to arrive today in Accra, the capital of Ghana, where he will meet with President John Dramani Mahama and the staff and leadership of UNMEER, which is headquartered there.

The latest statistics released by WHO show that there have been 18,603 reported cases of Ebola virus disease, with 6,915 reported deaths.

WHO noted that the number of cases reported cases was fluctuating in Guinea and decreasing in Liberia, and there were signs that the increase in incidence has slowed in Sierra Leone. Meanwhile, no new cases have been reported in Mali since 24 November, WHO noted.

The latest information dated yesterday noted that “interventions in the three most-affected countries continue to progress in line with the UN Mission for Ebola Emergency Response aim to isolate and treat 100 per cent of EVD (Ebola Virus Disease) cases and bury safely and with dignity 100 per cent of EVD-related fatal cases by 1 January, 2015.”

UNMEER also reported today that more than 11,000 households across 15 counties in Liberia were reached through door-to-door visits with Ebola prevention and home protection messages by tens of thousands of women, men and children taking part in the campaign.

Regarding the UN Multi-donor Trust Fund, the UN Spokesman noted the latest contributions from Israel for $8.75 million, from China for $6 million, from Germany for an additional $5.3 million, from Switzerland for $5.1 million, from Bolivia for $1 million and from Brazil for $600,000.

Meanwhile, the humanitarian appeal for the Ebola outbreak in West Africa for $1.5 billion has been funded for $1.03 billion. 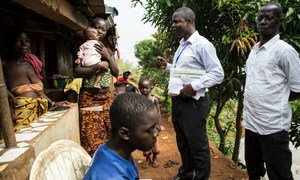 Ebola: UN Secretary-General will visit West Africa to ‘show solidarity with those affected’

Secretary-General Ban Ki-moon announced he will leave today for the countries hardest hit by the Ebola outbreak “to show my solidarity with those affected and urge even greater global action” to fight the epidemic, which two United Nations food agencies said could push the number of people facing food insecurity to more than one million by next spring.