UN expert group on arbitrary detention welcomes the release of detainees in Cuba, US

The United Nations Working Group on Arbitrary Detention today welcomed the recent release of a number of detainees in Cuba and the United States, some of whose cases have been followed by the expert group.

The release was announced after moves to normalize relations between the two countries were unveiled earlier this week. Media reports say that, as part of a deal negotiated over a period of 18 months, the US will restore full diplomatic relations with Cuba and open an embassy in Havana for the first time in more than 50 years.

“Although the release of these individuals might not be the direct consequence of our opinions, the aim of those opinions, namely the release, has been achieved and we can only welcome such outcome,” said said human rights expert Mads Andenas, who currently heads the Working Group.

“We encourage the release of other individuals arbitrarily detained, whether in the United States or in Cuba, or elsewhere”, Mr. Andenas added.

“A prerequisite for conflict prevention is the respect for the rights of each individual, including the right to be free from arbitrary arrest and detention,” he said.

Under its regular procedure, the Working Group qualified as arbitrary the detention, among others, of Antonio Guerrero Rodríguez, Gerardo Hernández Nordelo and Ramón Labaniño Salazar (in the United States) and Alan Phillip Gross (in Cuba).

The Working Group on Arbitrary Detention was established by the former Commission on Human Rights in 1991 to investigate instances of alleged arbitrary deprivation of liberty.Its mandate was clarified and extended by the Commission to cover the issue of administrative custody of asylum-seekers and immigrants.

In 2010, the Human Rights Council confirmed the scope of the Working Group's mandate and extended it for a further three-year period in September 2013. 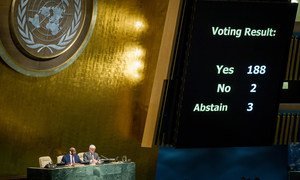 Ban Ki-moon hails decision by US, Cuba to normalize relations

United Nations Secretary-General Ban Ki-moon today welcomed the “very important step” taken by the leaders of the United States and Cuba towards normalizing relations between the two countries.