The top United Nations official on human rights issues has welcomed the recent conviction and sentencing of a senior army officer in the Democratic Republic of the Congo (DRC) for crimes against humanity, adding that the move would help garner momentum for other similar cases currently underway in the country.

Former FARDC (DRC national armed forces) Lieutenant Colonel Bedi Mobuli Engangela, also known as “Colonel 106” after the battalion he commanded in South Kivu, was convicted on 15 December and sentenced to life imprisonment by a court in his homeland for crimes against humanity, including a 20 year sentence for rape and a 15 year sentence for sexual slavery.

According to UN High Commissioner for Human Rights, Zeid Ra’ad Al Hussein, Mr. Engangela was also charged with murder, torture, abduction, and “other forms of grave deprivation of physical liberty.”

“Such a high-profile conviction of a senior officer will, I hope, bring some measure of comfort and catharsis to the victims of the horrific human rights violations committed and ordered by Engangela,” Mr. Zeid said in a press release today. “This case is a major boost in the fight against impunity.”

The decision by the military court in Bukavu in South Kivu province in eastern DRC is just the latest in a recent string of convictions of military and police officers for sexual violence crimes.

In November, FARDC General Jerome Kakwavu was sentenced to 10 years in prison for rape, murder and torture, the first case ever in which a general faced prosecution by a military tribunal in DRC for rape. Meanwhile, on October 25, FARDC soldiers and national police officers (PNC) officers were also convicted for the rapes of women and girls in separate cases in North Kivu Province and Kasai Occidental Province.

In his press release, the UN rights chief called on DRC authorities to build on the momentum created by these cases and “to continue to prioritise justice and accountability for gross human rights violations while ensuring that victims of such crimes receive adequate assistance and compensation.”

Equally, Mr. Zeid continued, authorities should “ensure that the rights of the accused – to a fair trial and to appeal judicial decisions – are fully respected.” 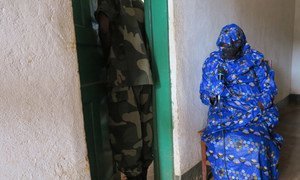 United Nations Special Representative on Sexual Violence in Conflict Zainab Hawa Bangura welcomed today the conviction of a senior army officer in the Democratic Republic of the Congo (DRC) for crimes against humanity, saying the verdict sends a “very clear message to perpetrators of sexual violence in DRC that they cannot hide behind a badge or evade justice with a uniform.”