Ebola: UN Secretary-General will visit West Africa to ‘show solidarity with those affected’

Secretary-General Ban Ki-moon announced he will leave today for the countries hardest hit by the Ebola outbreak “to show my solidarity with those affected and urge even greater global action” to fight the epidemic, which two United Nations food agencies said could push the number of people facing food insecurity to more than one million by next spring.

“The disease's impact is potentially devastating in the three countries already coping with chronic food insecurity,” according to a press release issued by the Food and Agriculture Organization (FAO) and the World Food Programme (WFP). Already this month, the agencies said half a million people are estimated to be severely food insecure in Guinea, Liberia and Sierra Leone.

FAO and WFP said reports from their offices in the three most-affected countries show that “border closures, quarantines, hunting bans and other restrictions are seriously hindering people's access to food, threatening their livelihoods, disrupting food markets and processing chains, and exacerbating shortages stemming from crop losses in areas with the highest Ebola infection rates.”

The Rome-based UN agencies warned that “the number of people facing food insecurity due to the Ebola epidemic in Guinea, Liberia, and Sierra Leone could top one million by March 2015 unless access to food is drastically improved and measures are put in place to safeguard crop and livestock production.”

At a year-end press conference at UN headquarters, the UN Secretary-General said he will leave later today to visit Guinea, Liberia, Mali and Sierra Leone, the four countries most affected by the Ebola outbreak, as well as Ghana, the headquarters of the UN Mission for Ebola Emergency Response (UNMEER).

Mr. Ban said he will be accompanied on the trip by the Dr. Margaret Chan, the Director-General of the World Health Organization, and his Special Envoy on Ebola, Dr. David Nabarro.

“I want to see the response for myself, and show my solidarity with those affected and urge even greater global action,” Mr. Ban said.

“Ebola responders are doing heroic work,” he told reporters. “Local communities and national governments are highly engaged. There has been an impressive outpouring of life-saving contributions from across Africa and across the world.“ 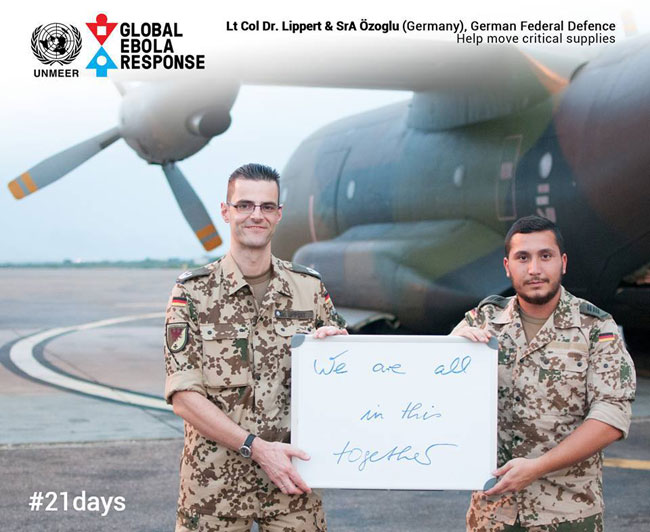 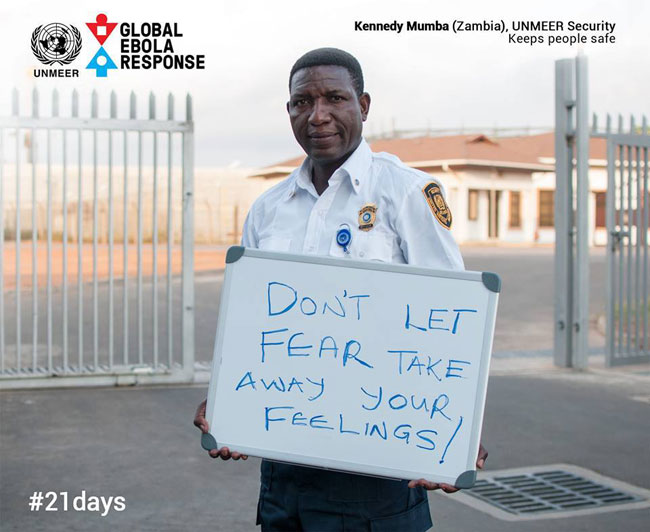 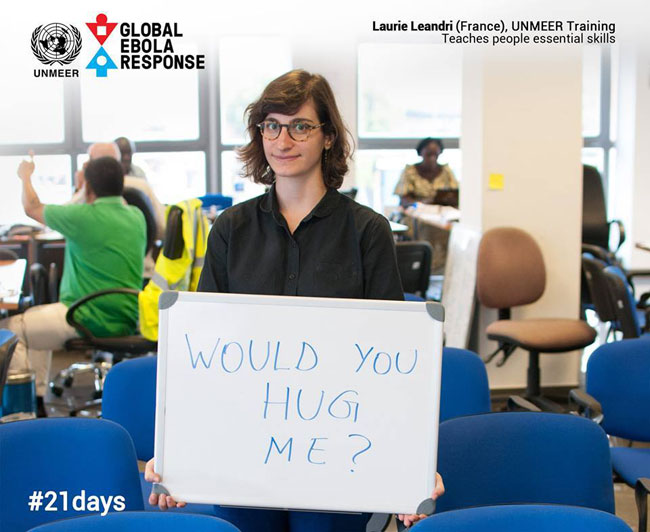 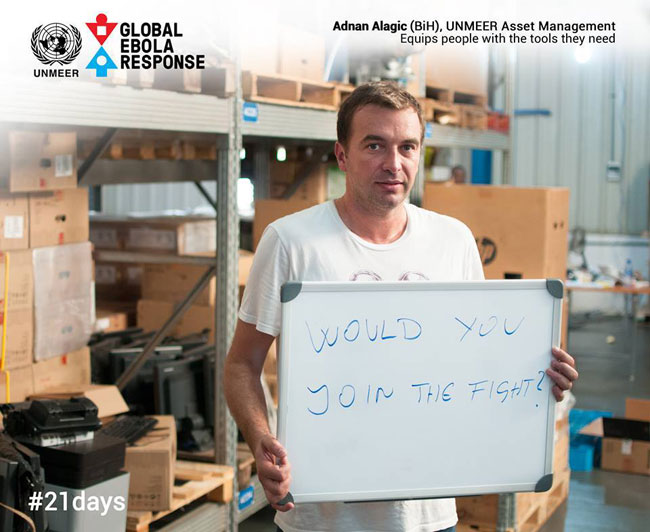 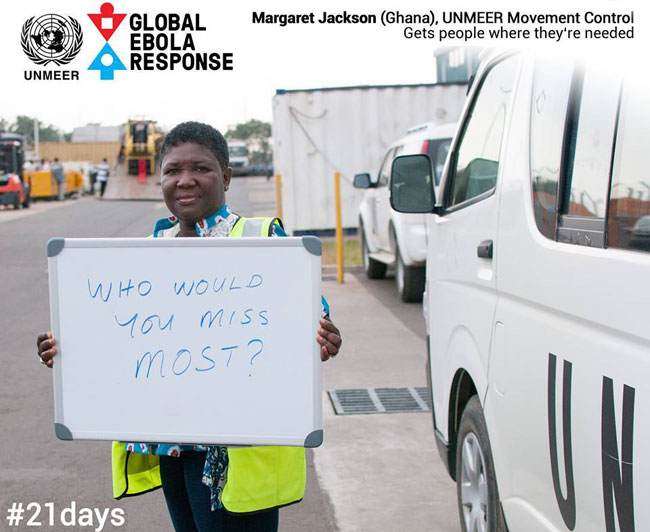 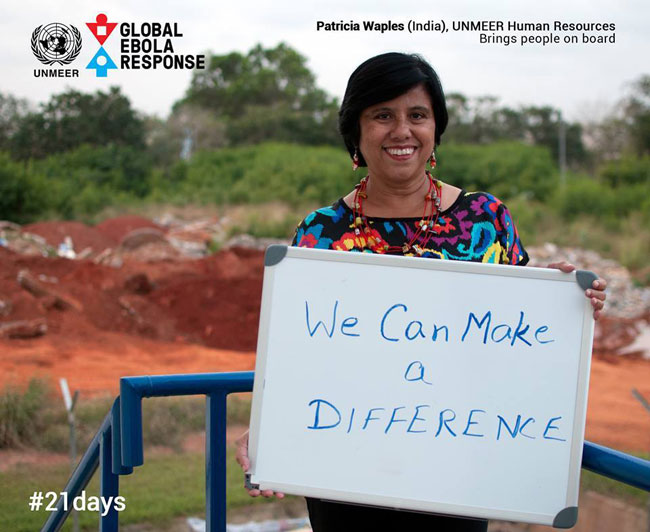 Meet some of the UN personnel from around the world working on #EbolaResponse in West Africa.

Our UNMEER colleagues have been counting down #21days to the new year with 21 ways they are working to stop the outbreak.

Mr. Ban went on to say: “The Ebola response strategy is working, and we are beginning to see improvements.”

“But now is not the time to ease up on our efforts,” he said. “As long as there is one case of Ebola, the risk remains. We must do everything we can to get to zero.”

UNMEER, meanwhile, reported today that Sierra Leone’s President Ernest Bai Koroma announced that government officials will begin a house-to-house search on Wednesday for sick people in the Western Area of his country, which includes the capital Freetown.

Joining forces with the Government and other partners to launch Operation Western Area Surge (WAS), UNMEER aims to ensure a focus on crucial Ebola response activities such as first and foremost, identifying and isolating potential patients, and increasing safe burials, ambulance dispatching, quarantine protocols, and social mobilization.

Ebola response partners are racing to reverse a spike in the rate of transmission of Ebola Virus Disease (EVD) cases in the Western Area of Sierra Leone, the new the epicenter of the outbreak. “We need to do case management, case isolation, have the beds, contact identification, safe burials, social mobilization,” says Anthony Banbury, head of UNMEER. “That’s where all actors are focusing their energy.”

“We’re flying in labs to support the surge, flying in ambulances, flying the President of Sierra Leone around to do social mobilization,” said Mr. Banbury. “The top priority definitely has to be getting to zero cases. That has to be everyone’s priority. Everything else depends on that.”

Getting to that goal, admits Mr. Banbury, is not going to be easy.

“We need a district by district strategy. Every district is in a different situation,” he said. “We have to tailor our interventions to the particular circumstances in each of the 62 districts across the three countries.”

The Sierra Leonean Government has periodically restricted movements into and out of hot spots in order to slow the disease's spread. Freetown and its surrounding areas currently account for more than half of the country's new infections, according to UNMEER.

The mission also reported that 87 Ethiopian health workers arrived in Liberia on Tuesday to bolster the response to the Ebola outbreak. The doctors and nurses will join an African Union (AU), which already deployed more than 175 Nigerian medics to Liberia and Sierra Leone.

The Netherlands is sending three teams of specialised laboratory technicians to Liberia and Sierra Leone to help fight the outbreak, according to UNMEER.

In Mali, the UN World Health Organization (WHO) said the last 13 people being monitored for Ebola had been released from quarantine, and the country could be declared free of the virus next month if no further cases are recorded.

And a review by the European Commission and WHO, organized to ascertain compliance with the existing exit screening guidelines at international airports in the affected countries, the evaluation team found a very high level of implementation of the guidelines in all three airports, according to UNMEER.

Response workers battling the Ebola outbreak in West Africa will receive “hazard pay” for the first time in Sierra Leone using mobile money because “unless there is a certain element of incentives, or danger pay, it’s very difficult to attract and retain people,” the United Nations Development Programme (UNDP) announced today.