UNICEF/Khuzaie
As the humanitarian needs in Iraq increased, funding for life-saving response has been critical to assist the vulnerable population. Since January 2014, CERF has allocated some US$11 million rapid response fund in support of emergency relief work in Iraq.
17 December 2014

International donors have pledged $418.6 million for a United Nations fund aimed at enabling the speedy delivery of humanitarian aid into the epicentres of crisis zones around the world, falling short of a broader appeal made by Secretary-General Ban Ki-moon and the Organization’s top relief official.

Earlier in the day, the Secretary-General and UN Under-Secretary-General for Humanitarian Affairs, Valerie Amos, had encouraged Member States to donate $450 million to the Central Emergency Response Fund (CERF) ahead of the coming year as proliferating crises and sustained conflicts continue to push global humanitarian needs to unparalleled heights and place growing demands on the UN.

“Humanitarian assistance is one of the most important functions of the United Nations,” Mr. Ban told delegates gathered at UN Headquarters in New York today. “When natural disasters strike and conflict rages, it is our duty to do everything we can for the women, children and men caught up in crisis.”

2014 has been a particularly difficult year dominated by “very severe humanitarian emergencies,” the Secretary-General noted. In Syria and Iraq, millions were surviving on a “bare minimum” while hundreds of thousands of others lived in “harsh conditions” at the Dadaab refugee camp in Kenya – the largest of its kind in the world. Other crises in South Sudan and the Central African Republic as well as in the countries affected by the Ebola outbreak were pushing the humanitarian system to its limits, he explained.

“The depth and severity of humanitarian crises is rising, due to the effects of climate change, urbanization, population growth and competition for resources,” Mr. Ban continued. “When the Central Emergency Response Fund started in 2006, some 30 million people were in need of aid. Now that number is more than 100 million.”

CERF has grown to become one of the largest and most reliable sources of humanitarian funding available, according to its website. In particular, it makes money available “at the beginning of a crisis, when time is of the essence and it is critical that emergency relief operations get under way quickly.”

Since 2006, it has disbursed more than $3.6 billion to emergencies in 88 countries. In 2014, however, the majority of CERF funding went to assist with crises in South Sudan, Sudan and the Central African Republic. Another $280 million went towards funding rapid response projects, including efforts to provide shelter for displaced communities in Pakistan and to meet the urgent needs of families affected by floods in Bolivia, Burundi and the Solomon Islands.

At the same time, $170 million in allocations helped humanitarian responses in 22 of the world’s most neglected crises – from Chad to Yemen to Haiti. The largest amount for an underfunded emergency, $20 million, went to Somalia. Meanwhile, CERF funding also helped kick-start the emergency response to the Ebola outbreak in West Africa.

To that point, Valerie Amos underscored the impact of the response funding, noting that in “truly challenging times” with humanitarian needs reaching “unprecedented levels,” the UN and international community needed to ensure that CERF “continues to be effective and serves the needs of the most vulnerable.”

“The Central Emergency Response Fund is one of the most effective tools we have to help people face the immediate, devastating effects of natural disasters, armed conflict and chronic emergencies,” agreed Mr. Ban. “It is fast. It is reliable. It saves lives.”

In addition, although he pointed out that new disasters could not be predicted, Mr. Ban reminded Member States that millions of people would inevitably continue to need help into 2015.

“Now, more than ever, it is essential that every dollar spent on humanitarian aid is spent to maximum effect. The needs are huge. There are millions of lives at stake,” he said. “I urge you to dig deep, and to contribute generously to this proven life-saving fund. With your support, we will once again exceed our $450 million dollar target for the coming year.” 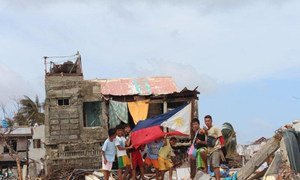 Donors pledged $404.6 million for the United Nations fund that enables the quick delivery of life-saving humanitarian aid to those who need it most around the world, responding to an appeal by Secretary-General Ban Ki-moon and the world body’s top relief official.