UN capacities 'pushed to the limit' in 2014, Ban says in year-end wrap-up

After a year of “discord, disease and disruption” that saw peace operations, diplomacy and humanitarian capacities “pushed to the limit” responding to West Africa's Ebola outbreak, terrorist groups and ongoing conflicts in Africa, the Middle East and Eastern Europe, Secretary-General Ban Ki-moon addressed reporters today at United Nations Headquarters, where he summed up the year and looked ahead to 2015.

Recapping the challenges the UN family tackled over the past year, Mr. Ban noted that over 100 million people need humanitarian assistance and more than 50 million have been displaced by various crises around the world – the most since the Second World War.

“The outbreak of Ebola in West Africa has challenged the international community in unprecedented ways,” he said, announcing that he will leave New York tonight to visit Guinea, Liberia, Mali and Sierra Leone, the four countries most affected by the outbreak.

He will also visit the headquarters of the UN Mission for Ebola Emergency Response (UNMEER), the first-ever system-wide emergency health mission, in Ghana.

“Ebola responders are doing heroic work,” he said, noting the engagement of local communities, national governments and the impressive outpouring of life-saving contributions from across Africa and the world, which were contributing to a response strategy that was working and that was starting to show improvements.

“I want to see the response for myself, and show my solidarity with those affected and urge even greater global action,” he said. “But now is not the time to ease up on our efforts. As long as there is one case of Ebola, the risk remains. We must do everything we can to get to zero.”

The Secretary-General also pointed to the impacts of conflicts in Syria, South Sudan and Ukraine, as well as to the spread of extremist insurgencies in Nigeria and Iraq, and instability in Afghanistan and the Sahel.

After hostilities in Gaza during the summer, Mr. Ban called on the leaders of Israel and Palestine to shoulder their responsibilities and “step back from the brink”, easing current tensions and salvaging the two-State solution, which was looking “ever more remote”.

Despite the challenges faced in 2014, Mr. Ban also pointed to gains made, saying Member States advanced “on several fronts” during the recent Lima Conference of Parties (COP 20) to the UN Framework Convention on Climate Change, which built on the success of the UN Climate Summit, which he convened in September.

“First, they agreed on a draft negotiating text to serve as the basis for the next round of negotiations,” he said, adding that States clarified plans on mitigation and other commitments to be included in their national plans of action, capitalized the Green Climate Fund with an initial $10 billion, and advanced an action agenda designed to show the wealth of opportunities offered by the transition to a low-carbon pathway.

“Taken together, these steps maintain the momentum towards Paris,” said Mr. Ban, referring to the upcoming 2015 COP when nations will attempt to hammer out the new universal treaty, which would enter force by 2020. “There is still a great deal of work ahead on finance and other difficult issues. But all governments, along with business and others, civil society, now agree they must curb the growth in emissions.”

He said the Lima conference was the “most encouraging” climate conference he had attended, putting in place the building blocks for a meaningful, universal climate change agreement in Paris next year.

Progress was also seen on finishing the Millennium Development Goals (MDGs) and on laying the groundwork for a new agenda, including a set of sustainable development goals and the resources needed to achieve them.

“The stars are aligned for the world to take historic action to transform lives and protect the planet,” he said, looking ahead to 2015 and three high-level meetings, respectively, in Addis Ababa (financing for development), New York (post-2015 development agenda) and Paris (climate change), which offer the opportunity to chart a new era of sustainable development.

“The year 2015 must be a time for global action,” he said, calling for international ambition on forging a new development agenda and securing a climate change agreement.

He also said 2015 had to be the year when the “nightmare” in Syria ended and more was done to counter extremism and the rise of far-right political parties that target minorities, migrants and in particular Muslims. Meanwhile, the UN itself needed continual adaptation to the new global landscape.

He looked ahead to reviews of the UN's work on peace operations, peacebuilding, humanitarian financing and on implementation of the Security Council's resolution 1325 (2000) on women, peace and security.

“As we mark the 70th anniversary of the United Nations next year, we have a duty to answer the call of people across the world for shared prosperity and a sustainable future for all,” he said.

When Mr. Ban opened the floor for questions, he was asked about the recently released United States Senate torture report, which he called a “stark reminder” that we still need to do more to “stamp out” torture everywhere.

The prohibition of torture is an “absolute principle”, he declared, commending the report for “shining a light” on what happened. It has started a conversation, not only in the United States but also around the world the world on how to end torture once and for all.

When asked about whether the Palestinian people have a right to resist the occupation after several General Assembly and Security Council resolutions have failed to address the issue, Mr. Ban said the question was more suited for Member States who have the responsibility to implement and abide by these resolutions.

There still seems to be lack of political will on both sides to sit down together and resume a productive dialogue. “Of course, this occupation is illegal,” Mr. Ban said, stressing that as neighbours the Israelis and Palestinians have ”no other alternatives” but to live in peace. 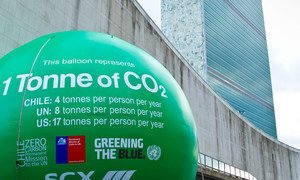 The launch of a new coalition spearheaded by the United Nations Environment Programme (UNEP) and focused on boosting renewable energy usage around the world was announced today as Member States head into the final three-day stretch of a major UN climate conference in Lima, Peru aimed at tackling the imminent threat of climate change.