UNDP/Morgana Wingard
With the cost of transport and goods going up and sales going down since the Ebola outbreak, vendors in Waterside Market, Monrovia, Liberia, are making no profit to support their families.
15 December 2014

The United Nations Economic Commission for Africa (ECA) today recommended that creditors should seriously consider debt cancellation for the countries worst-hit by the Ebola epidemic in West Africa, and also projected that even if those most affected were to register zero economic growth, the impact on Africa as a continent would be minimal.

“Educational systems, rising social stigma, unemployment, and decreased food security are some of the big issues that Ebola-affected countries must deal with,” according to study on the Socio-Economic Impacts of the Ebola Virus Disease (EVD) on Africa released today by the Addis-Ababa based UN regional forum.

ECA Executive Secretary Carlos Lopes noted that “while the social and economic situation in the three most affected countries is dramatic, the crisis for Africa as a Continent is exaggerated.”

“Although Guinea, Liberia and Sierra Leone have suffered serious Gross Domestic Product (GDP) losses, the effects on both West Africa and the continent as a whole will be minimal, partly because, on the basis of 2013’s estimates, the three economies together account for only 2.42 per cent of West Africa’s GDP and 0.68 per cent of Africa’s,” according to the report

Mr. Lopes also noted that one of most important recommendations is for debt cancellation for the 3 affected countries, referring to the report’s urging that bilateral and multilateral creditors should “seriously consider” such a move “because ”these countries will find it highly burdensome to meet their international debt obligations.”

The report also raised the alarm on the risk of a rise in mortality of diseases not related to Ebola and points out the wider impacts of the virus on the livelihoods of those affected.

Established by the Economic and Social Council (ECOSOC) in 1958 as one of the UN's five regional commissions, the 54-member ECA's mandate is to promote the economic and social development of its member States, foster intra-regional integration, and promote international cooperation for Africa's development.

In other news, the UN World Health Organization (WHO) announced that nine companies have made 19 submissions of proposed diagnostic tests for Ebola.

Regulators, researchers, clinicians and people from the countries affected by Ebola met in Geneva to discuss quicker diagnostic tests for the disease. Dr. Francis Moussy, focal point for Ebola diagnostics at WHO, said the evaluation of these tests is ongoing, a handful of which are similar to rapid pregnancy tests.

“Most of these tests still require laboratory evaluations to validate the claims from the manufacturers about the performance of the test, and so this is being organized now.”

Dr. Moussy also reported that one of the 19 tests has already been approved for procurement, but it is not one that delivers results as quickly.

Under current circumstances, he said, several hours and sometimes days are required to detect one case. People often have to travel to the laboratories that are concentrated in the cities, he said, stressing that the overall objective is to shorten the detection period.

Meanwhile, the UN Mission for Ebola Emergency Response (UNMEER) reported the last patient that was being treated for Ebola in Mali has made a full recovery. The person had tested negative on his second Ebola test on December 6, and had been the only person still being treated for the disease in Mali.

“If no new cases arise, Mali will be declared EVD-free on 18 January 2015,” UNMEER reported.

The UN mission also reported that a man who entered Guinea-Bissau from neighbouring Guinea the day after the border reopened is being treated for suspected Ebola.

“The traveller was running a temperature and put under surveillance as he tried to pass through the Fulamori border crossing,” UNMEER said. “He took advantage of lax security among border guards to escape observation and boarded a bus headed for the eastern city of Gabu, where he was apprehended.”

The agency also reported on how it was helping African countries work on improving their preparedness in the event of an Ebola outbreak.

“WHO teams have provided simulated exercises in hospitals and technical trainings on immediate emergency response and communication, on infection prevention and control, safe burials, and other components of response,” according to the health agency.

“The Ebola outbreaks and response in Nigeria and Senegal showed the world that the disease can be stopped if a country is adequately prepared from the outset,” said Isabelle Nuttall, Director of the Global Capacities, Alert and Response department at WHO. “WHO is now working with all countries on the at-risk list to help them meet the same standards for preparedness.” 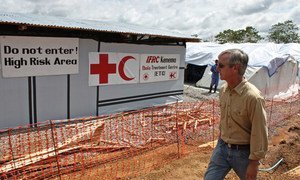