Alaa Ghosheh/UNRWA Archives
An Israeli Security Forces vehicle lights a gate in the security fence that separates farmers in the Biddu enclave from their land in the Seam Zone, which is the land between the 1949 Armistices Line and the West Bank Barrier.
15 December 2014

The quest for peace between Israel and the Palestinians has reached a “dramatic” crossroads, United Nations Special Coordinator for the Middle East Peace Process, Robert Serry, told the Security Council today in his briefing on the situation, warning that the region’s future remains “more uncertain than ever.”

Speaking to the 15-member body in New York, Mr. Serry explained that as Israel heads into election season following the recent collapse of its ruling coalition, the resulting “deadly diplomatic vacuum can be no excuse for either side to let the present situation get even worse.”

“Now is the time to deescalate and refrain from provocative steps, re-build trust and set conditions for a return to negotiations that will resolve this conflict,” Mr. Serry told the Council. “Hope for a lasting solution to the conflict must be restored before it is too late.”

The international community’s growing impatience with the regional stalemate and the simmering tensions between Israelis and Palestinians was recently highlighted by parliamentary decisions in France, Spain and Portugal to recognize a Palestinian state.

Despite a broad desire for Middle East peace among many outside the region, however, Mr. Serry warned that the situation on the ground remained “explosive” amid a recent escalation of tensions in Jerusalem and the West Bank. On 18 November, for instance, two Palestinians killed five Israelis and injured several others at a West Jerusalem synagogue before being shot dead by local police.

Further, on 29 November, a Jewish-Arab school in Jerusalem was set on fire and vandalized with anti-Arab graffiti. Meanwhile, over the summer, a 51-day conflict between Israeli forces and Palestinians in the Gaza Strip killed more than 2,100 Palestinians, including more than 500 children, and more than 70 Israelis. In addition, the fighting damaged or destroyed over 100,000 homes, affecting more than 600,000 people.

As a result of the widespread damage in Gaza, the UN official noted that a UN-backed reconstruction mechanism had begun to assist with the deliveries of construction materials into the war-ravaged enclave. In addition, he said, trade had been re-established between Gaza and the West bank, although it still remained well-below potential.

Nonetheless, the positive developments did little to reinforce what is already a fragile situation.

“Up to 80,000 families are living in houses that have sustained varying degrees of damage,” Mr. Serry continued. “The urgency to address these needs is compounded by the extreme weather Gaza has experienced in recent weeks with the early arrival of the rainy winter season.”

In his briefing, Mr. Serry also said he was “very concerned” about the reinstatement of Israel’s practice of punitive demolitions after almost a complete halt for nearly a decade.

There has been a surge in the use of punitive demolitions by the Government of Israel following a fresh uptick in tensions and deadly violence across Israel and the Occupied Palestinian Territories.

Most recently, the East Jerusalem home of Abd al-Rahman al-Shaludi, a Palestinian man accused of committing a car attack in Jerusalem that claimed the lives of a 22 year-old woman and a three-month old child, was demolished on 19 November – an act which garnered UN criticism.

According to UN rights experts, Israeli authorities have also slated at least six other homes of Palestinian suspects located in East Jerusalem, Askar refugee camp, and Hebron, for demolition or sealing – the practice of completely or partially closing off the rooms of a home with concrete or metal sheeting, prohibiting family members from accessing their homes, at times indefinitely. Meanwhile, following a recent deadly attack against a Jerusalem synagogue, a number of other house demolitions are reportedly being prepared.

Between 1 June and 30 November 2014, punitive demolitions have resulted in the displacement of 34 Palestinians, including 16 children. Another six families, including four in East Jerusalem and two in other parts of the West Bank, are at imminent risk of displacement.

The Special Coordinator added that Gaza’s precariousness also hinged upon its ability to become self-sufficient. He noted that forging “a clear and realistic plan” to give Gazans hope also required three specific priorities tied to bringing affordable energy, sufficient water and the physical reconstruction of the enclave. Unless that happened, he added, Gaza could be headed towards “another implosion with dire consequences.”

“We have reached a dramatic moment in the quest for peace between Israel and the Palestinians,” Mr. Serry concluded, as he warned that the future of a two-state solution remained in the balance. “It is for Palestinians and Israelis and their leaderships to take the courageous steps, now more necessary than ever, to salvage a peaceful and secure future for their people.” 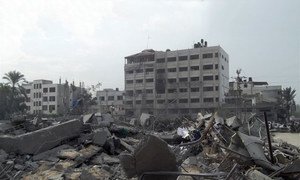 Reconstruction efforts in Gaza are continuing as thousands of people will soon have access to building materials for urgent repairs to their homes following last summer’s conflict in the war-ravaged enclave, the United Nations special envoy in the region has announced.