UNHCR/E. Ziyatdinova
A Ukrainian mother with her daughter and young friend in the room where she lives with her family at a centre for displaced people in Slavyansk.

15 December 2014
As the conflict in eastern Ukraine heads into its tenth month, continued fighting and bitter cold temperatures are placing more than five million people at risk, the top United Nations human rights official warned today as he described conditions for those still living in conflict-affected areas as becoming “increasingly dire.”

“The situation of many people, including those held against their will, in areas under the control of the armed groups may well be life-threatening,” High Commissioner for Human Rights Zeid Ra’ad Al Hussein said in a news release following the presentation of the UN rights office’s (OHCHR) latest report on the situation in the European country.

According to the news release, the OHCHR report – the eighth in a series by the UN Human Rights Monitoring Mission and covering the period from 1 to 30 November – cautions about a “breakdown in law and order” in Ukraine’s eastern regions fuelled by the inflow of heavy and sophisticated weaponry and foreign fighters, including from the Russian Federation. In particular, the report notes, such an influx of military materiel and personnel is having a “direct impact on all fundamental human rights, including the security, liberty and well-being, of individuals living there.”

The latest figures from OHCHR and the UN’s World Health Organization (WHO) paint a stark picture of the reality on the ground for millions of people living in the regions directly affected by the conflict, such as Donetsk, Luhansk, Zaporizhzhia and Dnipropetrovsk, where hundreds of thousands of internally displaced persons (IDPs) remain trapped.

From mid-April to 12 December, at least 4,707 people were killed and 10,322 wounded by fighting. Since the tenuous ceasefire began, at least 1,357 fatalities were recorded.

Amid the continued fighting, significant damage to infrastructure, economic breakdown, and disruption of social and medical services, Mr. Zeid observed that human rights issues were steadily being exacerbated but urged the Ukrainian Government to amplify its range of assistance to those civilians in need. Meanwhile, following the 2 November elections organized by armed groups in the areas under their control, thousands of citizens now find themselves bereft of any social services. Their situation, the report pointed out, remained of “great concern.”

For its part, the report adds that Government efforts to safeguard Ukraine’s territorial integrity and to restore law and order in the conflict zone had been accompanied by “arbitrary detention, enforced disappearances and ill-treatment of people suspected of separatism or terrorism.” Nonetheless, Ukraine has been in the process of elaborating a five-year human rights strategy due to be completed by 1 January 2015 – a “welcome” development, according to the OHCHR.

“The Government of Ukraine remains responsible for protecting the human rights of all Ukrainians, including the right to health, education and social security, in all its territory, including areas it does not fully control,” Mr. Zeid continued, as he urged all parties to bring the hostilities to a definitive halt. “I urge the Government to carefully consider the human rights impact of this decision.” 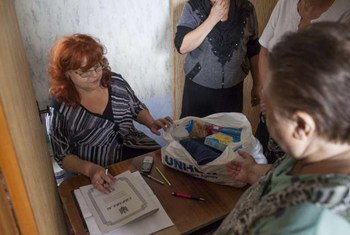 5 December 2014
The fighting in eastern Ukraine this year has internally displaced over half a million people leaving them vulnerable to the harsh winter months ahead, the United Nations Refugee (UNHCR) warned today as aid workers race against the clock to distribute essential cold-weather supplies.