15 December 2014
A team of United Nations, African Union and other Special Envoys on the Great Lakes region have noted with concern that overall implementation of the Nairobi Declarations remains slow.

While welcoming steps taken so far, including on the amnesty and efforts to facilitate repatriation of ex-M23 combatants, the team used the one year anniversary of the Declarations to call on the Governments of the Democratic Republic of the Congo (DRC), Uganda and Rwanda to strengthen collaboration to speed up repatriation of ex-M23 combatants and their dependants, calling also on leaders of the ex-M23 to cooperate fully.

“Beyond the amnesty and repatriation issues, a number of other critical provisions of the Declarations are yet to be implemented, as per the roadmap and timetable,” the envoys said in a statement urging signatories to resolve pending issues, including on justice for victims of the conflict.

One year ago, the Government of the DRC and the M23 rebel group signed two Declarations in Nairobi, Kenya, committing to immediate steps to find lasting solutions to the issues raised during the Kampala Dialogue and end the conflict between the DRC Armed Forces and the M23, which had caused immense suffering and claimed many lives.

The consensus reached, after a year-long peace process held in Kampala under the auspices of Ugandan President Yoweri Museveni, included amnesty and repatriation for eligible members of the ex-M23, as well as commitments to continue work towards the return of refugees and internally displaced people where appropriate, national reconciliation and justice, and social, security and economic reforms.

“Only with sustained and collective efforts will lasting peace and stability be achieved in eastern DRC, in line with the objectives of the Peace, Security and Cooperation Framework for the DRC and the Region,” said the statement that was signed by UN Special Envoy for the Great Lakes Said Djinnit and UN Special Representative and Head of MONUSCO Martin Kobler, together with envoys to the region from the African Union, European Union, United States and Belgium.

The statement called on regional leaders, particularly the Chairpersons of the International Conference on the Great Lakes region (ICGLR) and the Southern African Development Community (SADC), as witnesses of the Nairobi Declarations, to accompany the parties in the implementation process.

The envoys pledged to continue playing their part, including in the assistance of parties and support for the ICGLR Secretariat and the DRC National Oversight Mechanism (NOM), both mandated to monitor the implementation of the Declarations 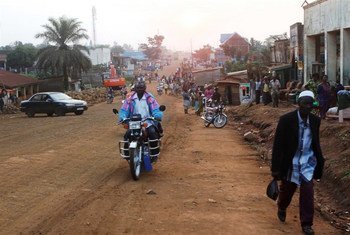 2 December 2014
A team of United Nations, African Union and other Special Envoys on the Great Lakes region have said they are “deeply outraged” by the recent spate of civilian massacres that have taken place in eastern Democratic Republic of the Congo (DRC), and have called on the Government to “engage in robust military action’ against all armed groups operating there.