UN Photo/JC McIlwaine
A coordinated search for weapons and restricted items being undertaken at the Tomping POC site in Juba, South Sudan.
15 December 2014

Highlighting the “dreadful” situation of civilians in South Sudan, the United Nations High Commissioner for Human Rights warned today that there are deeply worrying indications that fighting would intensify now that the dry season had begun, and urged all parties to practice restraint, engage in meaningful dialogue and work to restore calm.

“The people of South Sudan are living in a tinderbox, with emotions high, an abundant flow of weapons and with both sides recruiting fighters, often forcefully and including children,” Mr. Zeid Ra’ad Al Hussein said in a statement issued to draw global attention to the increasingly desperate living conditions for the country’s people after a year of conflict.

The High Commissioner also warned that inflammatory rhetoric is the rise and there has been sporadic fighting in which civilians have been killed and displaced and their property looted.

With talks between the Government and opposition set to resume this week, Mr. Zeid urged “both sides to use the talks to restore calm and avert another human catastrophe in the country.”

Currently, the high level of mistrust between communities, based on perceived support for either the Government or the opposition, means that violence is easily triggered. Reports of gross abuses of international human rights law are “all too common”, he added.

“The hopelessness in the camps of internally displaced people is palpable,” Mr. Zeid said. “These are women, men and children who spend their days in terrible conditions – at the height of the rainy season, they sometimes had to wade through waist-deep mud. Children have not gone to school for a year now, and may not be able to for a long time. Healthcare is basic at best. They have no freedom of movement, and live in dread, with violence always just around the corner.”

According to UN figures, there are 1.4 million displaced people within the country, and another half a million taking refuge in neighbouring countries. More than 97,000 people remain in compounds of the UN Mission in South Sudan (UNMISS) in very difficult conditions.

“Even after the conflict ends, it will take months – if not years – for these families to be able to bring a semblance of normalcy to their lives. Their homes and livelihoods have been destroyed. They have missed the planting season. They have witnessed and experienced violence. The conflict has already taken a very heavy toll on civilians – it is time for both sides to acknowledge this needless suffering, and to make a serious, concerted effort to bring it to an end, without further delay or prevarication.”

The High Commissioner called on political leaders to make clear, unequivocal public statements that the targeting of civilians is not permitted and will not be tolerated.

“Impunity emboldens the perpetrators of abuses – and has most likely accentuated the brazen nature of the human rights violations that have occurred during this conflict,” he said. “It is crucial that justice and accountability are visibly made a top priority.”

Mr. Zeid’s deep concern was echoed yesterday in a statement issued by the spokesperson for Secretary-General Ban Ki-moon, which said: “The killing must stop now. The very premise of the country's independence struggle - a new beginning that was supposed to be founded on tolerance, good governance, accountability and unity – is disappearing before our eyes.”

He called on the leadership of both factions to agree to “an inclusive, power sharing arrangement” and begin a transitional phase of governance that would address “the root causes of the conflict and ensure accountability for the crimes committed over the past year.”

“They must end the culture of impunity if reconciliation and a sustainable peace are to be achieved,” the statement added.

“I call on the international community to put its collective weight behind the peace process led by the Inter-Governmental Authority on Development (IGAD) and I commend the African Union Peace and Security Council for creating a Heads of State ad-hoc committee for this purpose. The United Nations will remain fully engaged in support of the peace process, the protection of civilians and the provision of humanitarian assistance.”

Also today, the Security Council in a statement released by the 15-member body’s President expressed its “profound disappointment” that the aspirations of the South Sudanese people have not been met, and that instead their leaders’ actions have led to yet more fighting and division. The Council underscored its strong condemnation of the serious human rights violations and abuses that have caused the death of tens of thousands of civilians, the displacement of nearly 2 million people in just 12 months. It renewed its deep appreciation for the courageous actions taken by UNMISS to protect tens of thousands of civilians under threat of physical violence.

The Council expressed its grave concern that given the continued disregard of the January 23, 2014 Cessation of Hostilities Agreement and the May 9, 2014 Agreement to Resolve the Crisis in South Sudan, and the absence of the establishment and implementation of a credible peace agreement, the risks of famine, state failure and regionalization of the conflict persist.

In this regard, the Security Council urgently demanded that President Salva Kiir, former

Vice-President Riek Machar and all parties refrain from further violence, implement the Agreement to Resolve the Crisis in South Sudan signed on May 9, 2014 by South Sudan and the SPLM/A (in Opposition), engage fully and inclusively in ongoing peace talks in Addis Ababa, uphold their commitment to establish a Transitional Government of National Unity, and allow and facilitate.

It also underscored the importance of fighting impunity and ensuring accountability for serious violations and abuses of human rights. 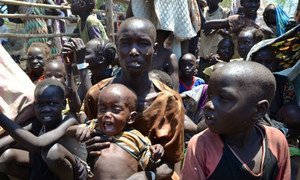 One year since conflict broke out in South Sudan and the country's warring factions have yet to reach a comprehensive peace agreement, endangering the lives of millions of people and the future of the world's youngest nation, United Nations Secretary-General Ban Ki-moon has warned.