Secretary-General Ban Ki-moon has hailed the outcome of a United Nations-backed climate conference recently concluded in Lima, Peru, praising delegates for setting the groundwork for a more conclusive agreement to be reached in 2015, a spokesperson for the Organization today announced.

The UN Climate Change Conference (UNFCCC), known also as Conference of the Parties (COP 20), concluded its 12-day meeting last Friday having brought together the 196 Parties to the UNFCCC in an attempt to hammer out a new universal treaty which would enter force by 2020. The final agreement is expected to be hashed out in Paris at the end of next year.

“The decisions adopted in Lima, including the Lima Call for Climate Action, pave the way for the adoption of a universal and meaningful agreement in 2015,” the UN spokesperson said in a statement. “The Secretary-General urges all Parties, at their first meeting in February next year, to enter into substantive negotiations on the draft text of the 2015 agreement coming from the Conference.”

In the statement, Mr. Ban applauded delegates for having made “important advances” in clarifying their needs for preparing and presenting their so-called Intended Nationally Determined Contributions (INDCs) to the new agreement and in “finalizing the institutional architecture for a mechanism on loss and damage.”

INDCs are the commitments countries are expected to make in order to keep average global temperature rise below 2ºC – the internationally-agreed limit aimed at staving off irreversible climate change.

Also in Lima, acknowledged the statement, the $10 billion goal for the initial capitalisation of the Green Climate Fund – the initiative designed to direct funding from developed nations to those developing countries most vulnerable to climate change – was surpassed.

The Secretary-General has long spotlighted the urgency of delivering a draft text providing a clear and solid foundation for the upcoming Paris negotiations, warning delegates during the Lima conference that “the more we delay, the more we will pay.”

During the final hours of the Conference, negotiations reportedly “stumbled” over difficult issues, such as how to differentiate the obligations and responsibilities of developing and developed countries, with frustration growing among many of the attendees.

UNFCCC Executive Secretary, Christiana Figueres, admitted that the two-week conference had, in fact, proven to be “very, very challenging” but she nonetheless praised the outcome as it had left “a range of key decisions agreed and action-agendas launched, including how to better scale up and finance adaptation, alongside actions on forests and education.”

“With this COP and moving on to Paris, we cement the fact that we will address climate change,” she noted.

In his latest statement, Mr. Ban's spokesperson said the Secretary-General called on all parties, especially the world's major economies, to submit their “ambitious national commitments well in advance of Paris” and added that the UN chief looked forward to working with both the Governments of Peru and France on a new Lima-Paris Action Agenda to “catalyse action on climate change to further increase ambition before 2020 and to support the 2015 agreement.” 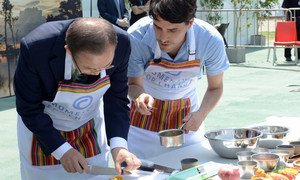