Briefing the press in Geneva today, OCHA’s Jens Laerke said most of those affected are subsistence farmers, farm labourers and low-income families.

In Honduras and Guatemala, up to 75 per cent of maize and bean crop has been lost and thousands of cattle had died. In the coming months, food insecurity is expected to get worse as families deplete their food stocks.

In Guatemala, the Government declared a state of public calamity in 16 departments in August and by October, 30,000 families had finished their food stocks. Those families were today in deep distress, said Mr. Laerke.

In the so-called “dry corridor” in eastern Guatemala, a joint Government/UN/NGO (non-governmental organization) assessment found that one in four households suffered from moderate or severe malnutrition. Children under five, pregnant women and female-headed households are most vulnerable, said Mr. Laerke.

In Honduras the Government had declared a state of emergency in the drought affected western areas, as crop loss had reached up to 75 per cent. Assessments also found high levels of malnutrition in children under five. An emergency assessment in September found that nearly 20,000 children were malnourished as a consequence of the long drought, said Mr. Laerke.

In El Salvador, the Ministry of Environment and Natural resources had reported that the country was experiencing its worst drought since 1977. The authorities said that in hotspot areas in the eastern part of the country, more than 80 per cent of farmers reported that they have lost all of their crops.

Humanitarian Country Teams had drafted Emergency Response Plans in Honduras and Guatemala to support the Governments in dealing with this emergency and UN agencies were also supporting the Government in El Salvador.

Giving more details on the various appeals by affected countries, Mr. Laerke said in Honduras, the Government has appealed for international help. More than $13 million was needed for the Emergency Response Plan and the Central Emergency Response Fund (CERF) had provided $2.6 million in funding.

In Guatemala, the Government had launched a $28 million Action Plan and was seeking $17 million in support. In El Salvador, UN agencies were also preparing to apply for funding from CERF. 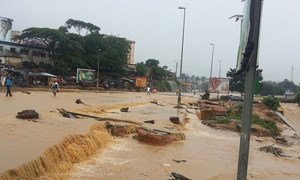