IRIN/Ahmed Dalloul
Parts of Gaza have been decimated by Israeli strikes.
11 December 2014

Reconstruction efforts in Gaza are continuing as thousands of people will soon have access to building materials for urgent repairs to their homes following last summer’s conflict in the war-ravaged enclave, the United Nations special envoy in the region has announced.

In a statement released earlier today, the UN Special Coordinator for the Middle East Peace Process, Robert Serry, noted that more than 20,000 homeowners are expected to be able to procure construction material by the end of December for critical repairs ahead of an expectedly cold winter.

“This can only be the beginning of an effective process to rebuild Gaza,” read Mr. Serry’s statement which also stressed, however, that “much more needs to be done.”

Speaking to Gaza Ministers of the Government of National Consensus and interlocutors of the private sector, Mr. Serry emphasized the importance of their “direct engagement” to address large scale reconstruction challenges and to prioritize projects for this purpose through the pre-established UN-backed reconstruction mechanism.

Despite the positive steps forward for many Gaza residents, Mr. Serry warned that the operating environment continued to face many challenges, including “a fragile and informal” ceasefire which has not yet solidified and a lack of empowerment of the Government of National Consensus in Gaza with no control over border crossings.

“These difficult issues, coupled with insufficient financial assistance from donors, have only worsened the atmosphere in an already devastated Gaza,” the Special Envoy continued.

Mr. Serry said he remained “gravely concerned about the dire situation” and planned to urge all stakeholders and the international community to “make good” on their calls to help Gaza when he visits the UN Security Council next week.

“This includes progress on all fronts, progress which must be made now lest we see Gaza fall back into yet another conflict,” he concluded. 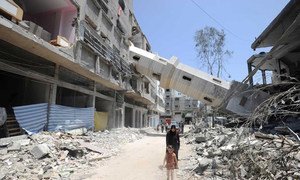 The next phase in reconstruction efforts for war-ravaged Gaza is slated to begin as early as next week following an updated “understanding” between Israeli and Palestinian stakeholders, the United Nations special envoy in the region has announced.