UNDP/Nicolas Meulders
A displaced woman from northern Mali in the Sahel, waits at a temporary shelter near Mopti's main bus station.
11 December 2014

Amid a proliferation of militant groups and “disquieting” levels of food insecurity, the situation in the Sahel has become increasingly fragile, a United Nations special envoy told the Security Council today, as she urged the international community to ramp up its efforts towards helping the diverse and troubled region.

“The security situation in the Sahel continues to be impacted by the crises in Libya, northern Nigeria, northern Mali and the Central African Republic,” Special Envoy for the Sahel, Guebre Sellassie said in her end-of-year briefing to the 15-member body.

Ms. Sellassie last updated the Council in June providing a similarly bleak overview of the situation in the Sahel – a vast expanse of territory stretching from Mauritania to Eritrea, including Burkina Faso, Chad, Mali, Niger, Nigeria, Senegal and Sudan. In her briefing today, however, the envoy explained that the region was facing an added threat as reports that Islamic State of Iraq and the Levant (ISIL) militants had established a bulwark in the Libyan desert.

“The persistent allegations that the Islamic State has set up training camps in Libya are particularly worrisome,” she said. “If the situation in Libya is not quickly brought under control, many states in the region could be destabilised in the near future.”

Coupled with the ISIL threat, Ms. Sellassie warned, was the deteriorating security situation in northern Mali where deadly attacks targeting UN “blue helmets” and communities living along the border with Niger were steadily intensifying. This, she said, came despite progress achieved in the inter-Malian talks held in the Algerian capital of Algiers and an agreement by peacekeeping countries to strengthen regional security cooperation.

In addition, instability in Nigeria’s north also endangered the wider region as “unspeakable Boko Haram atrocities” continued to pose a threat to some Sahel communities and countries. As a result of the militant groups’ continuing operations, an estimated 100,000 people had fled into Niger’s Diffa region, further exacerbating the Sahel’s humanitarian situation which remained “disquieting.”

“Five million more people have become food insecure since the last reporting period. The number of children affected by acute malnutrition in the Sahel also increased from 5 million in January to 6.4 million today,” Ms. Sellassie continued, noting that spiralling insecurity and conflicts had already displaced some 3.3 million people, amounting to a two-fold increase from January.

Against that backdrop, she added, the overall $1.9 billion humanitarian appeal for the region continued to remain underfunded.

Nevertheless, the Special Envoy indicated that “some progress” had been achieved, including a European Union-led partnership which was continuing to provide “a critical framework for regional cooperation on resilience”; a UN Development Programme (UNDP) initiative aimed at supporting Mali to mainstream social cohesion in its delivery of social services as well as help build the capacity of Government institutions in Mauritania and Niger on conflict prevention and the protection of human rights; and a UN Office on Drugs and Crime (UNODC) plan to support the development of accessible, efficient and accountable criminal justice systems across the Sahel – a region crisscrossed by drug trafficking and illicit trade.

Despite the “important and necessary steps” taken by the international community and regional partners in boosting the Sahel’s security and economic outlook, Ms. Sellassie cautioned that Member States could not afford to become distracted from the perilous situation on the ground.

“The Sahel region continues to face multifaceted challenges to peace and development,” she acknowledged. “Given the deterioration of the political and security situation in the region and the adverse impact on humanitarian and development gains, the need for sustaining Security Council attention on the Sahel is greater than ever.” 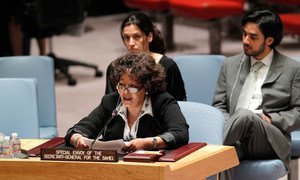