The United Nations today congratulated the front line workers in the field battling Ebola on their well-deserved recognition as Time “Person of the Year,” while countries affected by the outbreak and their partners met to ensure cases do not cross borders and to lay the foundation for resilient health systems respectively.

A one-day regional technical meeting in Monrovia brought together the four affected countries of Liberia, Sierra Leone, Guinea and Mali, as well as neighbouring Senegal, Côte d'Ivoire, and Nigeria, with the UN Mission for Ebola Emergency Response (UNMEER) to develop an integrated and joint strategy for cross-border response.

Liberian President Ellen Johnson Sirleaf emphasized the need to pool shared regional resources to counter the Ebola outbreak across the whole region, and the head UNMEER, Anthony Banbury, stated the clear commitment of the United Nations to support the regional initiatives.

“The UN system looks at things within national borders. National governments of course look at things within national borders. Major donors have funding programs that look at supporting programs in a national way,” said Banbury. “So we have to really work to change the way we normally operate so that we can put in place the most effective response to combat this crisis of Ebola.”

A summit of heads of states from Guinea, Liberia and Sierra Leone and Mali is scheduled for next week to review and endorse recommendations and commitments made at today's regional meeting.

Also today, UNMEER, the World Food Programme (WFP) and other UN entities tweeted their congratulations to all of the frontline Ebola Response partners on their great work and recognition as Time Magazine's” Person of the Year.”

In Geneva, Dr. Margaret Chan, Director-General of the UN World Health Organization, opened a two-day meeting of officials from Ebola-affected countries, donors and international agencies meet with the aim of laying the foundation for resilient health systems.

Saying that the three hardest-hit countries, Guinea, Liberia, and Sierra Leone, are among the poorest in the world, Dr. Chan said “Prior to the outbreaks, these countries had only 1 to 2 doctors to treat a population of nearly 100,000 people. That number has been diminished as more than 600 health care staff have been infected.”

She also noted that by the time Ebola was identified as the causative agent, on 21 March, the virus was firmly entrenched in Guinea.

“This is what can happen in the absence of a well-functioning health system,” the WHO chief said.

According to WHO, the objectives of the meeting are to: identify the main constraints and challenges faced by countries in rebuilding and developing more resilient health systems; identify medium- to long-term solutions on how best to build and invest in systems that deliver basic essential quality health services that can also respond adequately to future emergencies and crises; agree on the roles and responsibilities of all stakeholder groups on their contribution to building resilient health systems.

To date, close to 18,000 cases of Ebola have been reported with more than 6,300 deaths, according to WHO, and Sierra Leone now has the highest total number of reported cases with 7,897 cases reported to date. 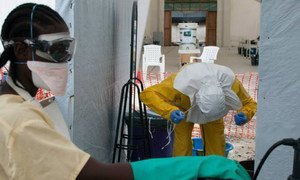 The United Nations, working with its national and international partners to halt the Ebola outbreak in West Africa, is currently focusing attention on bringing down the high levels of transmission in western Sierra Leone and ensuring that cases do not cross the border from Guinea into neighbouring Mali, the UN Special Envoy on Ebola Dr. David Nabarro said today.