9 December 2014
Not a single country is immune to the risk of genocide, said the United Nations Secretary-General’s Special Adviser on Prevention of Genocide today as he marked the 66th anniversary of the signing of the 1948 Genocide Convention.

“As we continue to fight and to realize the objectives, we pay tribute to the millions of men and women who have lost their lives to genocide,” said Mr. Adama Dieng as he briefed reporters at UN Headquarters in New York, as part of a series of events in the run-up to Human Rights Day, commemorated annually on 10 December.

“We owe to them and to ourselves and future generations to realize a world free of genocide. We are still far from that, but we aim to make it happen,” he added.

Genocide must and can be prevented if we have the will of applying the lessons learned from Rwanda, Srebrenica, and the Holocaust. It is important to identify risk factors that would lead to genocide rather than to wait to when people are being killed.

Genocide is when “you are being killed not for what you have done, but for who you are,” Mr. Dieng explained.

Currently, 140 Member States are party to the UN Convention on the Prevention and Punishment of Genocide, which was adopted in 1948.

On Thursday, Mr. Dieng’s office along with the Permanent Missions of Italy and Tanzania will launch a new Framework of Analysis for Atrocity Crimes which will focus on early warning signs and prevention strategies.

“We know from our experience that genocide is not a single event but a process that takes time, planning and resources which could be halted at any stage,” he said.

Marking the anniversary of Convention is an opportunity to renew our commitment to prevent genocide. “We must accept that there is no part of the world that can consider itself immune from the risk of genocide and all regions and all States must build resilience to these crimes,” the Special Adviser noted.

It is the collective responsibility of Member States, international institutions, civil society as well as the media to prevent such crimes.

He said that in 2005 world leaders committed to protecting populations who are at risk of genocide through the R2P, or ‘responsibility to protect’ initiative, now an international norm that addresses the failure to prevent and stop genocides, war crimes, ethnic cleansing and crimes against humanity.

But the question remains why some States have been ready to address genocide and in some cases even prevent it, while others have, unfortunately, failed to do so.

“We are still unable to protect people in Syria from human rights violations,” he said, adding that had the Security Council acted when the uprising against the Syrian Government was still peaceful, the current and devastating situation might look different.

“Would we still have seen the rise of the barbaric group like ISIL[Islamic State in Iraq and the Levant]? Such groups do not come from nowhere,” Mr. Dieng said.

As for other conflicts, he said atrocious crimes in South Sudan and the Central African Republic (CAR) are being committed based on the issue of identity because they are easily manipulated to generate fear, hatred, and violence.

“We need to think about the significance of the Genocide Convention and do more on the promise of ‘never again.’ We need political leadership from Member States and the courage to take steps that are not always easy,” he said.

When asked about the recent decision by the International Criminal Court (ICC) to drop the charges of crimes against humanity for Kenyan President Uhuru Kenyatta, Mr. Dieng said that he respected the independence of the Court. Accountability for gross human rights violations which occurred in Kenya is important. Victims are waiting for justice.

Answering a question on Gaza, he said he was not here to make a legal determination of genocide but analyse the risk of genocide. Last summer’s conflict may have led to crimes against humanity or war crimes. He was aware of Israel’s disproportionate military response. But when you send rockets from a civilian area, like Hamas did, that is a crime as well.

When asked about crimes committed during the time of United States intervention in Iraq, he said that the American soldiers who were indicted and flown over to the United States to face justice. This is an example of a country that has no capacity to bring to justice criminals.

On Ukraine, he said that the claims by civilians of genocide in the eastern part of the country, he reiterated that no region in the world is immune to atrocious crimes and called for all efforts to protect the rights of minorities in Ukraine.

He also responded to questions on the treatment of the Tamils in Sri Lanka, increasing anti-Semitism in Europe, and Islamophobia. 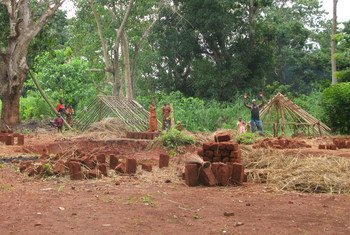 24 November 2014
A United Nations humanitarian mission has visited a town in the Central African Republic (CAR) amid an outburst of violence that left at least 14 people injured and three killed, the Organization’s humanitarian relief office announced today.