World Bank/Curt Carnemark
Female patient gets a check up in India.
9 December 2014

Some 80 per cent of the population across 44 countries lives without any health protection, essentially being deprived of the right to healthcare simply because they cannot afford it, according a new report released by the International Labour Organization (ILO).

Globally, some 40 per cent of the population is excluded from access to healthcare, the ILO said in a statement today.

The study Addressing the Global Health Crisis: Universal Health Protection Policies, found that in Africa, countries where 80 percent of people are without health care include Burkina Faso, Cameroon, Guinea and Sierra Leone.

But universal health protection is “key” to fighting poverty, reducing inequity and nurturing economic growth, ILO Director-General Guy Ryder reiterated ahead of Universal Health Coverage Day, which will be observed on 12 December.

“These linkages cannot be ignored in policy development,” he said.

Since 2010, national fiscal consolidation policies have stalled or even reversed steps towards universal health coverage by increasing the financial burden on private households, cutting back health services and capping wages of the health workforce.

In countries like Sierra Leone, 75 per cent of total health expenditure comes from private resources in the form of out-of-pocket payments, which has led to deep impoverishment.

“It is the poorest with the highest needs who suffer the most from having to pay out-of-pocket healthcare expenses,” explained Xenia Scheil-Adlung, Health Policy Coordinator at the ILO.

Health workers are often poorly paid, too. ILO estimates that 10.3 million additional health workers are needed to close the current gaps. In countries like Haiti, Niger, Senegal and Sierra Leone, as many as 10,000 people have to rely on services provided by five or fewer health workers.

In a high-income country like Finland there are 269 health workers available for 10,000 people.

The situation gets worse in rural areas, where 56 per cent of the global population do not have health protection coverage, compared to 22 per cent of the urban population. Seven million out of the total 10.3 million health workers who are missing globally are needed in these areas.

Investment in health systems leads to sustained economic growth, increased productivity and wellbeing for populations, a reason why countries like Benin, Gabon, China, the Philippines or the United States have expanded health coverage in recent years.

Isabel Ortiz, Director of the ILO Social Protection Department, said that “quick fixes” like small vertical programmes – for example, immunization – are not enough.

Overcoming the current global health crisis requires a policy shift towards universal health protection and points to ILO Recommendation 202 concerning national floors of social protection as a useful tool for achieving that goal.

The ILO study shows that a precondition for such a move is that countries are committed to fully implementing rights to health, minimizing impoverishing out-of-pocket payments and ensuring sufficient numbers of skilled, decently paid health workers. 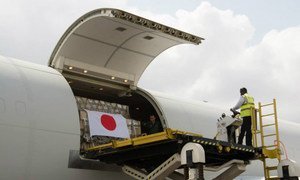 The first of 700,000 sets of protective gear intended for healthcare workers battling on the frontlines of the Ebola outbreak in West Africa arrived today from Japan and were handed over the United Nations, as the UN Children’s Fund (UNICEF) said the crisis has left some 5 million children out of school.