The United Nations today launched a multi-billion dollar appeal for critical funding as its humanitarian arm and relief agencies prepare to tackle an unprecedented level of crisis around the world in 2015, the Organization announced today.

Spearheaded by the UN Office for the Coordination of Humanitarian Affairs (OCHA) and spanning a broad swathe of conflict zones and refugee crises – from the Occupied Palestinian Territories and Myanmar to Yemen and Ukraine – this latest appeal calls for $16.4 billion to help at least 57.5 million people who “have experienced unimaginable suffering” with assistance in the coming year.

“Over 80 percent of those we intend to help are in countries mired in conflict where brutality and violence have had a devastating impact on their lives,” said Valerie Amos, UN Under-Secretary-General for Humanitarian Affairs and Emergency Relief Coordinator, at a Geneva press conference kicking off the appeal.

“We will continue to put people at the centre of our relief efforts and do everything we can to respond quickly and effectively, but the rising scale of need is outpacing our capacity to respond.”v

According to OCHA's latest estimates, 2014 saw a “sharp rise” in the number of people affected by conflict as inter-communal violence erupted in South Sudan and the Central African Republic (CAR). Meanwhile, long-standing conflicts the Democratic Republic of the Congo (DRC) and Syria continued to yield vast numbers of internally displaced persons (IDPs) and refugees, only adding to the sense of crisis pervading their respective regions.

Against that backdrop, the crises in Iraq, South Sudan, CAR and Syria alone account for over 70 per cent of overall funding requirements.

In addition, OCHA said, February 2015 will see the launch of strategic response plans covering requirements in West Africa's Sahel region and Djibouti, increasing the number of people to be reached with humanitarian assistance and further depleting the funding pool for 2015.

Also at the press conference, António Guterres, the UN High Commissioner for Refugees (UNHCR), warned that the humanitarian world was no longer facing a “business as usual” scenario as humanitarian needs had climbed to “unprecedented levels.”

“Without more support, there simply is no way to respond to the humanitarian situations we're seeing in region after region and in conflict after conflict.”

International donors provided $9.4 billion in funding in 2014. Nevertheless, that was only 48 per cent of the total amount requested by the aid community.

“Every year we ask our donors to do more – and they do,” Ms. Amos continued. “But as crises become more complex and go on longer, the gap between needs and resources grows.” v

“I hope we can close it in 2015 because if we don't raise the money it means that we are able to help fewer children, women and men with medicine, food and shelter; the basics they need to survive,” she said. 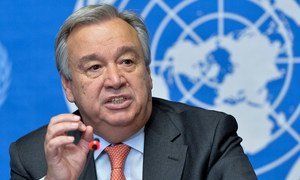 The global humanitarian system has reached its limits in dealing with the upward trend in forced displacement due to mounting pressures from conflicts and persecution around the world, the head of the United Nations refugee agency warned today, calling on the humanitarian community to “think out of the box” when it comes to funding emergency response.